By HOPE BWALYA and HELLEN TEMBO –
As Sunday night’s rioting at the University of Zambia in Lusaka spilt into yesterday, Higher Education Minister Nkandu Luo responded by suspending all activities of the student’s union.
Professor Luo (right) said according to investigations by the authorities, the riots were being instigated by those aspiring for positions in the student’s union in up-coming elections.
She told a Press briefing in Lusaka that all students had already been paid the allowances they were demanding apart from the accommodation allowance which affected only a few students and which was due to be paid yesterday.
She said the self-sponsored students who owed accommodation rentals should have a discussion with management and not cause havoc at the institution because their problem has nothing to do with Government. 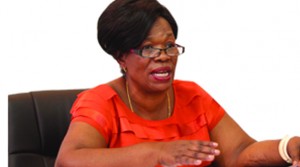 On the go-slow by the lecturers, Prof Luo said the ministry was in dialogue with the staff over their grievances.
The students on Sunday night blocked the Great East Road with burning tyres and stones to press for the payment of delayed project and accommodation allowances as well as an end to the lecturers go-slow that started last week.
University of Zambia Students Union (UNZASU) president Adrian Matole said students were mostly aggrieved over delayed project allowances and their eviction from the hostels.
Mr Matole said those two issues were important to the students, because they affected their learning.
UNZA Vice-Chancellor Luke Mumba said management was engaging relevant authorities in resolving some of the grievances that resulted in the protests.
Professor Mumba said in an interview yesterday that the institution had engaged the Scholarships and Loans Board to resolve the delayed allowances.
“We will engage the Scholarships and loans Board secretariat to discuss the delay in the payment of project allowances, by the way the project allowances are just for students sponsored by Government,” he said.
Prof Mumba said the students demand against the eviction from boarding was unfair because management had given the students enough time to pay and only 400 out of 800 students had paid.
On the action by the lecturers, he said management and the University of Zambia Lecturers and Researchers Union (UNZALARU) were holding discussions.
Lusaka Province Police Commissioner Nelson Phiri said investigations had been instituted in the riot and that the police had been dispatched to patrol the campus.
No arrests had been made by after when another stirring of confusion was quickly put down by police.