By CHUSA SICHONE
MEDICAL practitioners have paid glowing tribute to late former Health minister Joseph Kasonde, describing him as a gentle mentor and icon.
Dr Kasonde’s professional service organised by the Zambia Medical Association (ZMA) at the University of Zambia Medical School, Ridgeway Campus, in Lusaka yesterday was not only a somber, but was also punctuated with jokes, which the bereaved family could not resist but join other mourners in laughter.
Dr Kasonde’s casket, aboard an Ideal Funeral Home hearse, was under escort by the Zambia Army personnel to and from the Ridgeway Campus, who also offered pall-bearing services. 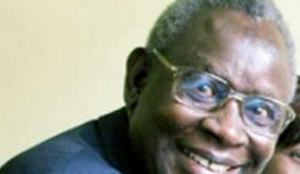 Dr Kasonde’s successor and incumbent Health Minister Chitalu Chilufya said: “Today, the body of Dr Joseph Kasonde may be in this casket, his works will live on and his legacy will live on.
“He distinguished himself; he was not only a humble and intelligent policy formulator but a leader who molded all of us, a great mentor.”
Dr Chilufya said the creation of the two permanent secretary positions (administration and health services) were Dr Kasonde’s brainchild, and described him as a ‘giant’ medical doctor of national and international repute, illustrious and consistent in his respect and regard for research.
The minister said Dr Kasonde played midwife to the birth of the transformational agenda in the health sector and blended intellectual depth with wit, humility and diligence.
Dr Chilufya said when Dr Kasonde ascended to the Ministry of Health, he remained consistent and coined the Patriotic Front manifesto that focused on primary healthcare, and multi-sectoral approach to health that focused on addressing social determinants of health as a way of producing a health population.
He said Dr Kasonde coined the Act that gave birth to the National Health Research Authority, and that his passion on public health and research was under his leadership that the National Public
Health Institute was born.
ZMA president Abidan Chansa described Dr Kasonde as a great medic and a statesman who served the country well and that his death had robbed the profession of its father and a gallant soldier who lived the spectrum of medical practice whose life all medical doctors in the country and beyond should emulate.
“As the Zambia Medical Association, we remember Dr Kasonde for the three Cs that he advocated and he was known for during his tenure as minister of Health, Caring in a Clean Competent environment and that is what a medical doctor ought to be,” he said.
Dr Chansa said the ZMA wanted to inculcate Dr Kasonde’s values (three Cs) in every doctor that practiced in the country.
Lusaka Apex Medical University chairperson Tackson Lambert said Dr Kasonde was among the eight founder members and the first chairperson of the institution and its brain bank, who was a hard worker of high standard and quality whose legacy would live on.
Former Ministry of Health permanent secretary Davy Chikamata paid tribute to his ‘mentor’ on behalf of the obstetricians and gynecologists while Home Affairs Permanent Secretary (professor) Elwyn Chomba gave the academic history. Kawaye Kamanga gave the life history.
During the Professional Service, the medical tools that Dr Kasonde used in his career, a stethoscope, white coat and book were retired (placed in the casket) besides all the doctors present reciting the Hippocratic Oath in his honour.
Dr Kasonde, who died on Friday last week aged 79, is survived by a wife, Mary, five children and seven grandchildren. The family was present at the professional service.