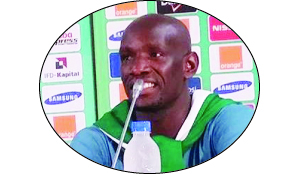 SKIPPER Kennedy Mweene says the Chipolopolo must beat Algeria in this Saturday’s Russia 2018 World Cup qualifier to be played at the Heroes National Stadium.
And coach Wedson Nyirenda urged the players not to overrate Algeria but approach the game with caution.
Zambia is third in a four-team Group B with one point, five behind leaders Nigeria and will be desperate to pick up a win against Algeria to get the campaign back on track. Cameroun are second on two points while Algeria have one point.
Twenty-six players out of the 31 summoned for camp reported with just strikers Fashion Sakala, Patson Daka, Brian Mwila, Emmanuel Banda and defender Stoppila Sunzu being awaited.
Mwila was expected in camp last evening while the Under-20 trio of Fashion, Banda and Daka arrive today.
Mweene said in an interview before their first training session at the Vodafone Woodlands Stadium yesterday that Algeria does not send any shivers down the player’s spine.
He said the north Africans were still beatable despite them having big names in Leicester City forwards Riyad Mahrez and Islam Slimani.
“I think the only result that will be acceptable at home is a win and then get something in Algeria. We are not afraid of them. Yes, most of them play in Europe but the football in Africa is different,” Mweene said.
The 2012 Africa Cup winning goalkeeper said despite the Chipolopolo bad start to the World Cup campaign, the team was still in contention.
“It doesn’t matter how we started the qualifiers, we are still in contention and we have to pull up our stocks,” Mweene said.
Mweene hailed the inclusion of the seven Under-20 players to the Chipolopolo saying that they can contribute to the glory of the team.
“If the under-20 impressed the coach in training, why not play them.
It’s not about age, they do have some experience and it’s about who wants it more,” Mweene said.
Nyirenda said he was happy with the player’s turnout and that would work on blending them into a solid team.
Asked about midfielder Fwayo Tembo’s unavailability to play for the national team, Nyirenda said the squad had enough depth and will not have a problem with the player’s absence.
“I see great sparks in this group I have called, they have nothing to lose but everything to give,” Nyirenda said.
Meanwhile, Under-20 call-up Enock Mwepu said he has not come to warm the bench but play on Saturday.
Mwepu said that he was excited about being called to the senior national team for the first time and that he will do his best.
“I am here to play and not sit on the bench. I am ready for the challenge. Algeria is just a name, it’s a team like any other and we can stop them,” Mwepu said.