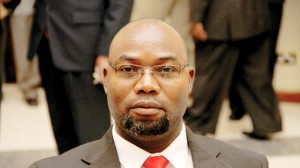 By GODFREY DUBE –
SPORTS Minister Moses Mawere has urged Africa Boxing Union (ABU) flyweight champion Alfred Muwowo (Ibrahim Mohamed) to stay grounded and continue making Zambia proud in his boxing career.
Muwowo successfully defended his ABU title against 35-year-old South African Delisizwe Komani on Saturday night via a third round knockout.
Mawere said the country was proud of Muwowo’s achievements in the year 2017 stating it was not easy to win and defend the title within a year.
“Muwowo has made the country proud and I must say his victory was a gift to the Zambian people for the year 2018. This is an indication that Government has continued to work with various sports disciplines in making sure we achieve more accolades,” Mawere said.
He urged Muwowo to keep a cool head as he continues to pursue his dreams of becoming a world class boxer.
“It is good to see Muwowo defend his title and most importantly looking at his age (20), he is still young and will go far if he continues with the same spirit. The boy has got good skills and with continued support from the corporate entity, he is the future king of boxing,” he said.
Muwowo made Komani swallow his own words after knocking him out with a devastating right hook that sent him to the canvas after describing him as a kindergarten boxer.
And Oriental Quarries Boxing Promotions (OQBP) director promotions Christopher Malunga said the stable will continue working hard to produce good boxers that would bring glory to mother Zambia.
Malunga said Muwowo will still remain in camp until further notice stating plans to push for the WBC title have already started.
“We are taking our next promotion to Solwezi and we shall make sure that all our boxers fight there. My approach towards sports is different. We want all the parts of the country to watch these boxers live. By so doing, we are able to tap more talent and nurture it,” Malunga said.
Malunga thanked Government and all the sponsors that came on board to make sure the end of year OQBP international tournament was a success.
“I believe all sports disciplines have the potential to make the country proud, no sport should be considered a minor because we can all do it. It is important to make mention that with proper support and investment, all sports disciplines can make mother Zambia proud,” Malunga said.