Challenges of being intersex
Published On September 26, 2018 » 5518 Views» By Times Reporter » Features
0 stars
Register to vote!

FOR many people born arise not only from their
bodies, but also from a world that struggles to tolerate their
existence. 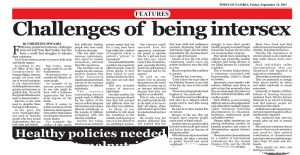