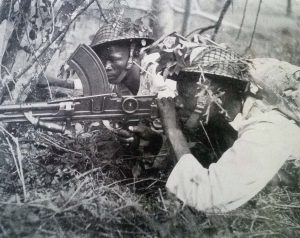 Asikari (native police) in action during World War 1 skirmishes. Picture by courtesy of the NATIONAL ARCHIVES OF ZAMBIA.

IT is exactly 100 years since World War 1, which is also called the Great War, came to an end and the catastrophe still remains a fresh wound for many people in the world.
For Zambia – formally called Northern Rhodesia – it was one o’clock on Sunday, September 3, 1914, in a blazing month, for Europeans of Northern Rhodesia sitting on diverse verandas of their houses waiting for lunch break.
They tuned in to news, hoping against hope that it might be good, they were at war with Germany!
Men rose slowly and thoughtfully from their chairs, without much talk and went outside, some of them, in the Northern Rhodesia Regiment Reserve and on the Reserve of the British Naval, Military and Air Services had already been called up.
While, the young and old, even veterans of the Boer War, pondered on what to take from their wardrobes and suitcases and where to go.
Franklin, an author of War and Northern Rhodesia wrote that the Europeans called their African servants and told them: “We are fighting the Germans again!”

The Africans, with mouths agape, were bewildered and some said “sorry bwana” while others simply shook their heads.
The First World War was a global war originated from Europe from July 28 1914 to November 1918.
It was the saddest event in history and an estimated nine million combatants and seven million civilians died as a direct result of the war, while between 50 to 100 million deaths worldwide was caused by the influenza epidemic that broke out.
The Great War did not spare Northern Rhodesia, now known as Zambia, where considerable activity of the war took place at the harbour of Abercorn (a town in the northern part of present day Zambia that is now called Mbala).
This author had opportunity to read through the telegram messages that were exchanged by administrators during the war.

The telegrams which are now 100 years old, have been safely stored at National Archives of Zambia.
This young author managed to read through two major sources of information namely the British South African Company (BSAC) Index and District Division Notebook which has existed for 100 years and has so much information that had a recount of what happened at Abercorn (Mbala) during the First World War.

According to a telegram contained in the BSAC Index, Lieutenant Sibold Malima warned scouts engaged at the time that the area was being destroyed, including stores, as the enemy approached Kasama.
“Kasama has been destroyed by fire and about to 15-20,000 pounds native food has been exterminated. The European rations already evacuated,” read the telegram.
Abercorn District – now Mbala District in Northern Province – is historically significant in terms of the First World War because it saw immense hostilities between the warring sides, arraigned on the border of the two British and German colonial territories.
There was a gunboat activity on Lake Tanganyika where German forces invaded from East Africa ransacked Kasama and advanced as far as the Chambeshi River before news of Germany’s surrender reached their Commander – General Von Lettow Vorbeck.
According to the Abercorn Division District Notebook, the war began at the German outpost at Schukmannsburg in the Caprivi Strip which was occupied without resistance, but a German force under General Wahle invaded the northern border.
That note book recounts how the District of Abercorn was started by Fr Hugh G Marshall Administrator in 1893 who was instructed by Johnston as the British Consul for the area.
Marshall built a well-fortified Boma at Chief Zombe’s village and acted as magistrate and postmaster.
In 1895, the British South Africa Company took over administration of the territory and called it North-Eastern Rhodesia while the ‘Zombe Boma’ became known as Abercorn, named after the Company Chairman Duke of Abercorn, then president of the BSAC.
Before the Great War broke out, Abercorn was favoured by British administrators as being healthy and having a pleasant climate with plenty of hunting and fishing.
Until German East Africa  was taken over by Britain in 1919 as Tanganyika, Abercorn and the smaller Chiengi Boma on Lake Mweru where the most remote outposts of British Southern Africa.

General Von Lettow Vorbeck surrendered at Abercorn on November 18 in 1918.

The memorial at Mbala, where von Lettow-Vorbeck formally surrendered at the end of the First World War was designed by Sir Edwin Lutyens.
In the magistrate office, Abercorn Northern Rhodesia 1918 by telegram administrator then submitted a report that Vorbeck surrendered under the term ‘armistices’ with his entire force which included 11 companies comprising 150 Europeans, 1,165 Asikari, an immense volume of porters amongst whom were women.
Asikari in German language means native policeman, a word which today has been adopted and corrupted by some of the local languages in which it is pronounced as Asilikale (a plural version of Nyanja) or ‘Musilikali’ for just one, and abashilikale (in Bemba).
The telegram further notes that the range of arms surrendered included Portugues high velocity gun 24 Maximsn and 14 Lewis guns.

Bigdier-General WFS Edwards received the surrender and decided that those who had surrendered should be without ostentation.
Further, the telegram notes that it was Von Lettows intention after leaving Kasama to make for the Congo.
The administrator described Vorbeck as a fine looking man who was quiet and was about 48 years old.
‘Vorbeck had shown no sign of distress when offering surrender although he felt the whole situation bitterly,’ the telegram read.
The administrator explained that Europeans were tough looking in every sense who never easily gave their feelings away while the Asikari were naturally very differently equipped and were a hard-looking body of men.
Today, Abercorn – Mbala –m has a number of archaeological sites in the area such as at Kalambo Falls, Nsumbu National Park, Kasaba Bay, among others.
Mbala was the village of Chief Zombe on the Lucheche River when it became the focus of British interest as a result of travels by the explorer David Livingstone, the first European to visit the area, in the 1860s.
He was followed some years later by Verney Lovett Cameron who surveyed Lake Tanganyika.
Verney Lo 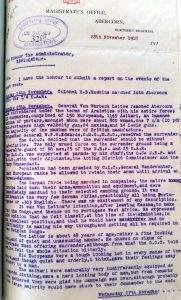 The actual telegram from the magistrates office in Abercorn, Northern Rhodesia in 1918 which shows the date stamp, the dates it was authored an d part of a report that was submitted when General Von Lettow Vorbeck surrendered at Abercorn. Picture by courtesy of the NATIONAL ARCHIEVES OF ZAMBIA.

vett Cameron was an English traveller in Central Africa and the first European to cross (1875) equatorial Africa from sea to sea.
Cameron’s life was chiefly devoted to projects for the commercial development of Africa.

He was selected to command an expedition sent by the Royal Geographical Society in 1873, to assist Dr Livingstone.
Livingstone inspired missionaries of the London Missionary Society to come in the 1880s to Niamkolo on the Lake and Fwambo and Kawimbe on the plateau.
These missions had links to the African Lakes Company which later set up in Mbala and Mpulungu.
It is for this reason that the Northern Province expo is being held under the theme ‘Unlocking The Tourism Potential of Northern Province 100 Years After the First World War.’
From November 21 to 24, the expo would be key and perfect timed to unlock the tourism potential that Mbala has.

It is evident that after 100 years, many people in and out of the country did not know that a war had once raged in Abercorn (Mbala).

However, one hopes that the World War One Centenary commemoration would now expose potential tourism in various areas of the province.