A 37-YEAR-OLD woman of Chisamba accused of murdering her step-daughter has been referred to the hospital for medical examination to determine her mental state at the time of committing the offence.
Charity Banda is accused of murdering eight-year Musola Chansa before
burying her in front of her house where she planted some sweet
potatoes to prevent any possible trace.
Banda is also facing a second count of attempted murder after she allegedly tried to kill her husband Kennedy Chansa by pouring hot water on him for pestering her about the whereabouts of the girl.
This is a matter in which Banda, a former sales assistant at Fringilla Farms is facing two counts of murder and attempted murder in relation to the death of Musola in 2017 and burning of Chansa last year.
Particulars were that on December 7, 2016 in Chisamba Banda murdered Musola.
In the second count, Banda is accuse 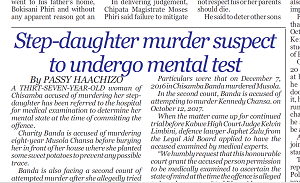 d of attempting to murder Kennedy Chansa. on October 12, 2017.
When the matter came up for continued trial before Kabwe High Court Judge Kelvin Limbini, defence lawyer Japhet Zulu from the Legal Aid Board applied to have the accused examined by medical experts.
“We humbly request that this hon

ourable court grant the accused person permission to be medically examined to ascertain the state of mind at the time the offence is alleged to have been committed,” he said.
Justice Limbini granted the application by the defence lawyer and allowed Banda to go for medical examination before trial could continue.
Four witnesses including a juvenile have testified against Banda since
the commencement of trial.