Kambwili in again…Reports himself to Police HQ, conveyed to Luanshya where he is said to have commited a crime
Published On November 30, 2018 » 2652 Views» By Times Reporter » HOME SLIDE SHOW, SHOWCASE
0 stars
Register to vote! 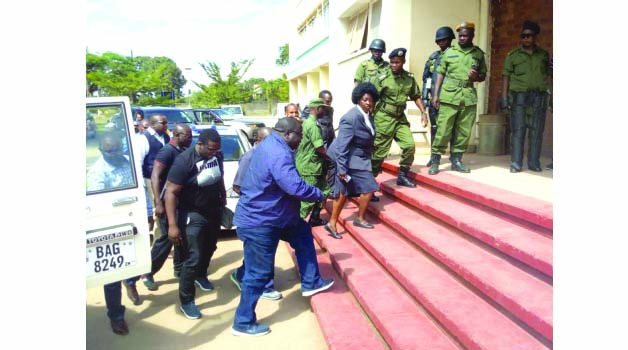 • ROAN Member of Parliament Chishimba Kambwili (in blue) arrives for questioning at the Luanshya Police station in Luanshya on the Copperbelt yesterday. Picture by CHRISTABEL CHIWILA

By CHILA NAMAIKO and STEPHANIE KUNDA –
NATIONAL Democratic Congress (NDC) consultant Chishimba Kambwili was yesterday arrested and locked up in Luanshya after being apprehended at Police headquarters in Lusaka.
The police apprehended Mr Kambwili at Police headquarters and immediately drove him to Luanshya where he -with 11 others – was arrested upon arrival and charged with unlawful assembly.
The outspoken parliamentarian who was denied bond by the police at Luanshya Police Station is expected to appear in court soon.
Mr Kambwili had reportedly gone to Police headquarters to lodge in a complaint against Copperbelt Police Commissioner Charity Katanga for insisting that he appeared for questioning yesterday despite askingfor rescheduling of his appearance to next week.
That followed a call out by the Police in Luanshya for the Patriotic Front (PF) Roan Member of Parliament (MP), to appear for an interview yesterday.
The white police Toyota Land Cruiser carrying Mr Kambwili arrived in Luanshya at 14:06 under heavy police escort and Mr Kambwili was immediately taken inside the police station for formalities.
Police officers were deployed at the police station who kept Mr Kambwili’s supporters at bay.
Around 16:30 hours Mr Kambwili’s lawyer Caristo Mukonka emerged from the police station and told journalists that his client was charged and arrested.
He said that he tried to arrange for police bond but police officers rejected the request.
Mr Mukonka said Mr Kambwili was likely to appear in court today.
“We have been told that dispensation of bond has been denied by the second-in-charge so we are going to court most probably tomorrow,” Mr Mukonka said.
Ms Katanga said shortly after the arrest that Mr Kambwili complained of chest pains and a medical practitioner from Thomson Hospital was arranged to attend to him while in detention.
She said he would appear in court soon.
Ms Katanga said that on November 25, between 09:00 and 12:00 hours Mr
Kambwili while acting with 11 others conducted an illegal meeting where some people protested and were ferried to a particular place.
She said all people intending to hold public meetings were supposed to notify police and it was for this reason that he was summoned to the police were he was charged and arrested.
On Mr Kambwili’s complaints against her in Lusaka she said people would always talk but that she would continue executing her duties.
NDC vice president Josephs Aakafumba said his party was disappointed but not surprised because the Home Affairs Minister Stephen Kampyongo said he would fix Mr Kambwili.
Earlier, Deputy Inspector General of Police Eugene Sibote confirmed to journalists during a briefing in Lusaka that Mr Kambwili was apprehended around 08:30 hours and was immediately driven to Luanshya Police station.
He wondered what Mr Kambwili wanted to do at the Police headquarters when he had allegedly no appointment with any of the officers.
Mr Sibote said, instead of going to Luanshya where Police had summoned him, Mr Kambwili decided to go to the Police headquarters.
“If any person commits a crime and avails himself or herself to the police other than where he or she is required to appear, such a person is required …and conveyed to the Police Station where he or she is required or alleged to have committed the crime,” Mr Sibote said.
He said, soon after Mr Kambwili appeared at Police headquarters, he was arrested and conveyed to Luanshya Police station where he was said to have committed a crime.
Through his lawyers, Mr Kambwili, was said to have written a letter addressed to Luanshya district criminal investigation officer to reschedule his appearance on account that he was supposed to appear before Magistrate Mwaka Mikalile in Lusaka today.
He had proposed to appear before the Police in Luanshya on Monday next week.
But Ms Katanga was said not to have been aware of Mr Kambwili’s letter.