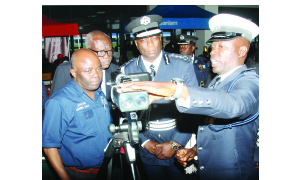 By CHUSA SICHONE and STEPHANIE KUNDA –
HOME Affairs Minister Stephen Kampyongo has directed the police to ensure that they vigorously pursue perpetrators of hate, divisive, tribal and discriminatory statements in line with Parliament’s recent resolution.
Mr Kampyongo directed Inspector General of Police Kakoma Kanganja and his officers to exhibit the same enthusiasm shown when clamping down on the culprits of chemical spraying and other criminal activities when following up on people propagating hatred, division, tribalism and discrimination in Zambia.
Mr Kampyongo said this when he officiated at Zambia Police Day at National Heroes Stadium in Lusaka yesterday.