By JESSIE NGOMA-SIMENGWA
THE United Nations (UN) has predicted that between 2017 and 2050, the number of people aged over 60 in developing countries will increase.
Old people, and women in particular, outnumber the men in older age, with the highest numbers being in developing countries.
According to the World Health Organisation (WHO), the aging population in developing countries is occurring at a rapid pace, with Africa being affected.
Generally, old people in developing countries are known to face high levels of negligence, poverty, illiteracy and are at risk of living with chronic health conditions.
Older women have been seen to suffer inequalities in most areas of their daily activities.
Zambia Aged People’s Association (ZAPA) has observed with concern that older women are being abused physically, psychologically and sexually.
ZAPA national secretary, Cyprian Pombolokani cites peri-urban areas such as Nkwazi Township in Ndola on the Copperbelt where the aged are targeted for abuse.
“We need to sensitise society on the rights of the aged and the National Aging Policy Document so that they do not feel insecure to live in the community,” he said in an interview.
Mr Pombolokani said the aged were more vulnerable because of their physical weakness, with women being the most affected victims, as some of them are widowed and look after orphans left behind by their children.
It is not easy for older women to protect themselves from sexual violence as they are generally depicted as being weak.
The fight against gender-based violence has not seen older women benefit much from the progress that has been made in tackling women.
Mr Pombolokani observed that sexual abuse such as rape brought shame and guilt in older women, therefore some cases have been under- reported.
He said most elderly women had also suffered at the hands of the community by being accused or suspected of practising witchcraft.
With regard to sexual violence, there was need for society to promote social norms that would help protect the elderly women from being sexually abused.
“Instead of the aged being given handouts as a remedy every time they need some help, it is time that society starts considering empowering us,” Mr Pombolokani said.
He also said that between 60-80 years, old people are still productive, hence the need to empower them with productive ventures.
He said in peri-urban areas, the mortality rate was high, with some aged women looking after orphans living in environments that are not habitable.
Despite developing countries having the least support for older people, it has been acknowledged that aged women subsidise national budgets by caring for orphaned children and sick people, thus contributing to the economic growth and wellbeing of a nation through the care service.
In addition, Mr Pombolokani said the aged women face challenges of poor sanitation and lack of clean water which forces them to draw water from shallow wells.
“Because of poverty and nothing to sustain them, the aged have been parading themselves in the streets of Ndola just to get a K2 and a bun, with the majority being women. This is not a sustainable practice,” he explained.
Some older women are living in poverty without basic necessities of life and lack of external support has made them vulnerable to sexual and physical violence.
Similarly, he said the social cash transfer was not adequate for elderly people to sustain themselves and this leads them to begging, a situation that increases the risk of abuse.
While efforts of empowering the girl-child are closing the gender gap in education, older women have been left out and have experienced a higher illiteracy level compared to that of older men.
This inequality in education has had a negative bearing on older women as it has exposed them to poverty.
Illiteracy in older women hinders their potential to contribute and have access to health services, besides securing income and other information that may be of use to them.
Because women’s participation in the labour market is lower than that of men, this has seen them suffer financially.
Mr Pombolokani urged all senior citizens to register with the association which would help address their rights and some of the social challenges affecting them.
“Even with women who have other alternatives such as farming land in rural and peri-urban areas, we have seen and heard how they are raped and killed,” he said.
Recently, a 92-year-old woman in Mumbwa in Central Province was raped in her granddaughter’s house by a 19-year-old man.
With the rapid social change, it is important to sensitise communities and ensure older women are protected.
Mr Pombolokani also encouraged chiefs to come on board by facilitating for land where projects could be implemented by the aged.
“We have come across cases where some chiefs take part in inflicting pain on the aged in the community by allowing them to put tattoos on the aged who are being suspected of practising witchcraft,” he said.
Elsewhere, Centre of Excellence on Ageing executive director, Oliver Kameya said society should have an agenda to plan for ageing in the next 50 years.
Mr Kameya observed how Zambia is likely to have over 10 million ‘street adults’ aged seventy years by the year 2100 if no plan was not put in place.
He described old women as the number one care givers despite their mental and physical health being obstacles to their daily lives.
“Due to lack of money and access to health centres, many of their physical health complaints go untreated, with no intervention of any organised health care services,” he said.
Policies to help the older population should stress the need for gender equity so as to improve the affordability and accessibility of healthcare.
Gender inequality in old age could only be achieved if obstacles such as health, illiteracy, and provision of daily basic services, coupled with protection from members of society who may want to take advantage of them, were addressed. 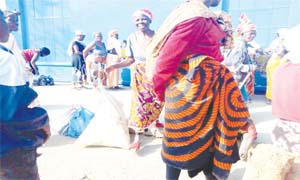 •THE aged should be involved in productive ventures instead of allowing them to be street beggers. Picture by JESSIE NGOMA SIMENGWA