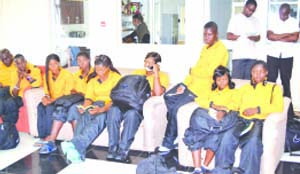 • ZAMBIA women Under-17 national team players at Kenneth Kaunda International Airport in Lusaka yesterday before departure for the United States of America. Picture by CLEVER ZULU

By GRACE CHAILE –
THE Zambia Under-17 team finally left for the United States of America for a 10-day training camp in readiness of the Costa Rica 2014 FIFA World Cup finals that starts on March 15 and ends on April 4.
And Sports Minister Chishimba Kambwili said the trip, including the training camp and the World Cup finals, will gobble about K1.9 million adding that the K10, 000 winning bonuses have been released to the Football Association of Zambia (FAZ) to pay the players.
The team that was hit by visa hitches left the Kenneth Kaunda International Airport (KKIA) around 16:00 hours for Johannesburg where the contingent was expected to connect for Atlanta then San Francisco before finally arriving in California to set up base.
Kambwili, who addressed the team at the airport, urged the players to remain disciplined regardless of the obstacles they will encounter during the training camp and at the tournament.
“You should bear in mind that you are not just representing Zambia but Southern Africa and this is you need to remain focussed and work hard so that you come back with the trophy. We also expect high levels of disciplined,” he said.
The Minister assured the team that Government was behind the team and delays in paying them the winning bonuses were not intentional.
Team captain Mary Wilombe said the players would not fear any side at the competition and will maximise the training camp so that they jet into Costa Rica well prepared to take on any team.
Striker Grace Chanda said she was looking forward to the training to improve on her skills as the team will be training using ultra modern facilities. Midfielder Barbra Banda said she and her team-mates will leave a legacy at the competition.
“People need to know us, they must know that Zambia has good players and the best team at the competition and we shall do our best for the country,” she said.
Meanwhile, United Nations International Children (UNICEF) yesterday appointed the Zambia girls team to be the Girl-Child Empowerment Ambassadors.
UNICEF representative to Zambia Hamid El Bashir said the team were role models to the girl-child not only in Zambia but entire Africa.
The full team has goalkeepers Edna Phiri, Hazel Nali and Musole Ng’ambo while the defenders are Chimwmewe Mwale, Mulai Wilombe,Mary Mulenga, Martha Tembo, Bridget Lungu and Given Mukamba.
Kachinga has picked Barbara Banda, Grace Mulaisho, Osala Kaleo, Margret Belemu, Ireen Lungu, Helen Chanda,Natasha Witika and Judith Zulu as midfielders with Jane Mubanga leading the strikers that include Grace Chanda, Memory Phiri and Penelope Mulumbwa.