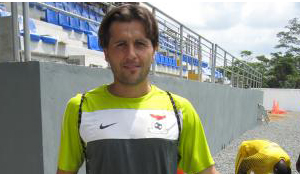 CHIPOLOPOLO coach, Patrice Beaumelle has said there are no excuses for professional players summoned for the March 5, international friendly match against Uganda in Ndola to report late for camp.
Zambia takes on the Cranes of Uganda next Wednesday at Levy Mwanawasa Stadium on a FIFA sanctioned day of friendly games and the result of the encounter will have a bearing on Zambia’s ranking on the globe.
Beaumelle said he expected all foreign-based players, apart from those ruled out with injuries, to be in camp in time for Wednesday’s game.
He said there was need for the players to take the Uganda game seriously and that his desire was to use his best players in the team.
“We did not have a full squad when we played Brazil in China but we performed well, the same applied to the game against Jordan and this time around, I would like to have the full squad in place.
“I therefore, expect all professional players to be in hopefully by Tuesday because this game is on a FIFA date and all players must honour their call to national duty.
“We know that most of them will have games at their respective clubs on Saturday and Sunday and I hope they will join us in time for the game” he said.
According to the FIFA regulations, all foreign-based players must report to camp 48 hours before an international friendly match.
The Uganda game will be the first home encounter for Beaumelle as Chipolopolo head coach.
Beaumelle presided over Zambia in the team’s away losses to Brazil, Jordan and Egypt, respectively last year.
The Frenchman guided the developmental squad to winning bronze at the 2013 CECAFA Senior Challenge tournament in Kenya.