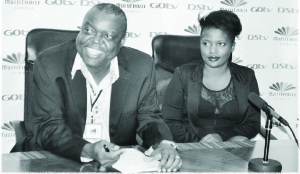 MULTICHOICE Zambia General Manager Simon Bota is happy that Zambia has produced three nominees for this year’s prestigious Africa Magic Viewers Choice Awards (AMVCA) slated for Lagos, Nigeria next weekend.
Zambia’s Nancy Handabile has been nominated alongside four Nigerians and a Kenyan in the category of Best Supporting Actress while Catherine Phiri has been nominated for the Best television Comedy Drama category which is more technical.
Jack Esterhuizen has been nominated in the category of Best Video editor.
Mr Bota says it is encouraging to see Zambian content showcased on DStv Africa Magic channels and that actors from the same production have been shortlisted for the prestigious accolades two times in a role now.
The three Zambian nominees in the inaugural AMVCA were Preston Kawanu for Best Costume Designer in the movie titled Kawanu.
Bernard Mulenga was nominated in the Best Art Director category while Christin Ngoma was in the Best make-up artist group for the same movie.
“We are very proud as Zambia for this achievement more that we even had a Zambian adjudicator at the same awards in the name of Mr Laurence Thompson,” Mr Bota said.
Nancy is exited for her name to be among the top recognised actresses in the southern African region.
She says the nomination on its own is a great honour to her and that it is a stepping stop to greater things to come in her professional acting career.
“As much as I am craving to put my hands on the prestigious award, even just the mere nomination is a great honour to me such that I will try and use the exposure to get connected to other production houses like in Ghana for instance,” she says.
Nancy, who is Times of Zambia correspondent said: “My going onto the interactional platform is a great privilege for me to lift the Zambian flag high as I will not only represent Zambia through my nomination by also what I will be wearing,” The Love Games actress has vested her trust in Zambia’s renowned designer Towani Clark of Kutowa Designs to design an appropriate Zambian themed outfit for her.
Meanwhile, Mr Bota has asked Zambians to continue voting for the Zambian nominees as he feels there is great possibility of a Zambian wining what he terms and the ‘African Oscars’.
“I remember what happened during the face of Africa competition, were we were thinking that we were not anywhere close to winning but we ended up winning through Lukundo,” he said
Lukundo Nalungwe was the first Zambian to have won the Mnet Face of Africa 2010