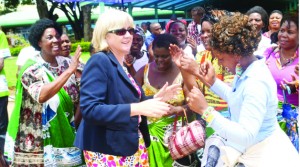 By BRIAN HATYOKA
VICE-PRESIDENT Guy Scott says he is hopeful that the regional conference for Directors of Public Prosecutions (DPPs) opening in Livingstone today will form a new landmark in the fight against corruption.
Dr Scott, who is accompanied by his wife Charlotte, arrived at Harry Mwaanga Nkumbula International Airport around 12:30 hours aboard a Zambia Air Force plane.
He was welcomed by Southern Province Minister Daniel Munkombwe, DPP Mutembo Nchito, Livingstone District Commissioner Omar Munsanje, Livingstone Mayor Aggrey Njekwa, and Livingstone Town Clerk Vivian Chikoti.
Others who received him were Southern Province Patriotic Front (PF) women’s chairperson, Annie Tischer, provincial defence and security chiefs, senior Government and PF officials.
Speaking upon arrival at the airport, Dr Scott said he was in the tourist capital to be the guest of honour at the regional conference on corruption for DPPs.
“I am the guest of the DPP Mr Mutembo Nchito who is holding a conference of his fellow DPPs from other countries in Southern Africa.
“The DPPs are going to discuss improved surveillance and treatment of corruption and I am hopeful that this gathering will form a new landmark in the fight against corruption,” Dr Scott said.
He said he would also visit Senior Chief Mukuni today as he understood that the traditional ruler had not been well.
“We shall also act as tourists and find time to talk to PF members. I was born in Livingstone and I am grateful to be back here for the first time in 2014,” he said.
Speaking earlier, Mr Munkombwe said the ruling party was growing in Southern Province.
“Let those dreamers continue thinking that Southern Province is theirs. They are right in their narrow thinking because PF is alive and growing here,” he said.