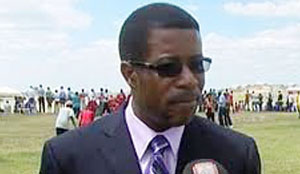 ZAMBIA Amateur Athletics Association (ZAAA) president, Elias Mpondela has tipped sprinter Gerald Phiri to win a medal at the International Association for Athletics Federation (IAAF) World Indoor Championships.
Mpondela said in an interview in Lusaka yesterday that he was confident that Phiri would do the country proud by winning a gold medal at the championship that gets underway today in Holland and ends on Sunday.
Phiri, who is based in the United States of America (USA), will compete in the 60metres race.
Mpondela said the runner arrived in Holland on Monday and has been training since, together with his personal trainer and physiotherapist.
“Phiri is a good athlete and we still believe that he will this year bring a medal for Zambia. His qualifying time was very good and that gives us the confidence that he will perform extremely well,” he said.
Phiri missed the 2011 championship final due to injury and Mpondela saying the athlete is in high spirits ahead of the event.
On the physiotherapist, Mpondela said ZAAA accredited Phiri’s personal physiotherapist to ensure that he remained in good shape throughout his quest for a gold medal.
Phiri had a qualifying time of 6.67 seconds beating his personal best of 6.62 in the 60 metres.