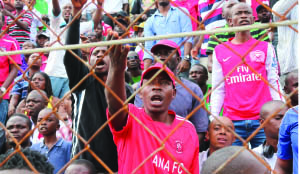 By KALUMIANA KALUMIANA –
NKANA seek a crucial away win this afternoon against Kampala City Council Authority (KCCA) in Uganda to keep their 2014 CAF Champions League aspirations alive.
The Kitwe giants are in a precarious situation heading into today’s first round, final leg match level at 2-all with KCCA.
Nkana have already made one great escape in the preliminary round over Mbabane Swallows of Swaziland after overturning a 2-0 away loss to win at home in the final leg and advance to the first round 5-4 on aggregate.
However, the challenge for Nkana this time is to try and repeat that feat this time away from home where they have already fared poorly in this year’s competition.
“We are going with a positive mind, we are going there knowing what we want to do.
“Having played our first game the hardest thing was not knowing how they play, but now that we know how they play, I think we will be able to have a good game and bring out a positive result for us,” said  Nkana coach Masauso Mwale.
Mwale knows he has a tough task ahead and is well aware that it is not a state secret of Nkana’s ability to leak early goals in the competition
Nkana have yet to even score first in any of their last three CAF Champions League games, a great concern about their mind-set at the back and in midfield where they have looked very vulnerable.
Midfielders Sydney Kalume and Kelvin Mubanga have blown hot and cold while at the back Christopher Munthali seems to be just a little short on the quality he produced last season.
A further setback is the unavailability of attacking midfielder Shadreck Muosnda who is injured robbing Nkana of that extra dimension going forward
His place has been taken by Mwila Kabwe who is expected to make his CAF Champions League debut.
However, Mwale has no such problems in attack where Ronald ‘Sate Sate’ Kampamba and Simon Bwalya are the duo have scored three goals in as many continental games played but must still work hard to beat KCCA’s impressive goalkeeper Omar Magoola.
Meanwhile, KCCA coach George Nsimbe will rely on winger Brian Majwega and striker Tony Odur who were both on target in the first leg to continue with that away form to ensure they progress.
Winner over both legs will face victor of the Zamalek versus Angolan club Kabuscorp with the Egyptian side carrying a 1-0 first leg win in Cairo to Angola this weekend.