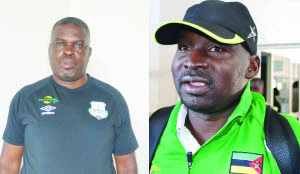 By MOSES CHIMFWEMBE –
ZESCO United take on Ferroviario Da Beira needing a victory to advance to the second round of the 2014 CAF Confederations Cup tournament when the two sides clash in an evenly balanced tie at the Levy Mwanawasa Stadium in Ndola today.
Having played to a barren draw in Maputo a week ago, pressure is on coach George Lwandamina to deliver his first win for Zesco and keep alive hopes of qualifying for the group stages of the competition.
Lwandamina is also alive to the fact that Zesco has a record of not losing a CAF match at home since 2006 when the Ndola side made its debut in the Champions League and later in the Confederation Cup.
A draw would see Ferroviario sailing through to the next round while a barren draw would see the match go into extra time with the possibilities of penalties to decide who advances to the next stage.
Thus the need for Zesco, who will be enjoying overwhelming support from home fans, to utilise its perennial attacking artistry of Winston Kalengo, Jackson Mwanza, Kangwa Chileshe and Mwape Mwelwa to score that needed goal.
Fans should expect Lwandamina’s men to combine efficiency and flair which has been their hallmark over the past years and that should enable them see off Ferroviario at this stage of the competition.
Lwandamina, who rued missed scoring chances in the previous leg, said loopholes have been sealed and that only a win will redeem Zesco.
“You know we missed a lot of chances which should have put us in a driving seat but it will be a different approach this time around and we are we are going for a win,” he said.
Gift Sakuwaha, Chishimba Changala and Kelly Sichilya must be solid in defence while Kondwani Mtonga and Justin Zulu are expected to be at their best in the midfield.
In the visitors’ camp, coach Victor Matine will be banking on deadly striker Mario Sinamunda together with the midfield duo of Egidio Coutinho and Henry Antony to score the goals and stun their hosts at their own backyard.
Matine, who predicted a tough encounter upon arrival on Wednesday, said his charges will showcase a different game to the first leg.
“Zesco is a good team and we respect them but we are here to play good football and to collect a positive result,” he said.