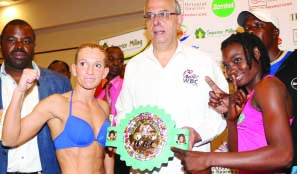 By SHAMAOMA MUSONDA and SANDRA MWILA –

On the same bill will be the mouth-whetting WBC International welterweight title bout between Zimbabwean Charles Manyuchi and Ghanaian Patrick Allotey, who boasts of an unblemished record from his 30 fights.

Catherine’s search for her spot on top of the world has seen her win various titles like the Women’s Professional Boxing Federation (WPBF) and the African Boxing Union (ABU) bantamweight titles, both of which she still holds.

And in winning and defending these titles, she has faced some strong pugilists and none of them has come stronger than Canadian Natalie Forget whom she fought at the same venue to win on unanimous point decision.

That win against Forget set Catherine off on a path into the limelight and greatness and she has not disappointed in any way. She has put up more convincing performances every time she steps into the ring and yet retains the calmness that is so important but yet so rare in sports stars.

But it is tonight’s fight that will announce Catherine to the world and place her in the top shelf of boxing as she stakes a claim to what will be her biggest fight to date.

An agile boxer with a steady jab and good feet movement, Catherine has an ability to soak pressure with ease and raise her game but it is her endurance that sets her apart from other female boxers.

And this evening fight should be one that will improve her record to eight wins from eight fights.

Mazelanik, on the other hand, has a record with black spots which include five losses from 19 bouts, a draw as well with a less than convincing knock out rate that has seen her win just one bout from the fights she has finished.

But most disturbing about her record is the fact that she has lost two of her last three bouts and one coming at the hands of Doris Koehler, who had lost her previous six fights. Mazelanik next fight was won on points against Claudia Ferenci, who had also lost her six previous fights.

How she handles and staves off a determined Catherine, who has not tasted defeat in her young career, remains a puzzle she will have to solve inside the ring.

The other WBC bout, which is the main event of the evening, will be one with a promise of a bloodbath between Manyuchi and the much acclaimed Allotey.

Manyuchi has become a favourite among Zambian fans because of his crisp and classy fighting style and a rare ring art that is so exceptional in the ring these days while his opponent has an impeccable record of 30 wins from as many fights and Allotey stated that he was not ready to give up on the perfect record.

The Zimbabwean considers Allotey to be brave for putting his un-dented record against a boxer of his quality. Manyuchi said he was fit and would not just let a chance for a world title fall on the way side and that he would add a one to where Allotey’s record reads zero defeats.

Allotey in response said that he would clobber Manyuchi and keep on his route to becoming a proper WBC champion.

This bout promises a real massacre, especially that Isaac Sowah appears as a common denominator losing to the two boxers with Manyuchi stopping him in the third round, while Allotey went the distance to take the fight.

The two WBC title fights will be supported by four bouts that will see Pethias Chisenga and Gibbon Kamota battle for the vacant national bantamweight title, while and heavyweight Donald Kampamba battle against Chamunorwa Kunorenda of Zimbabwe in a non-title bout.

Other bouts include a potential crowd teaser featuring Congolese Mbia Kanku of Oriental and Takudzwa Kuchocha from Zimbabwe in a welterweight non-title fight with another women contest seeing Lorita Muzeya up against Monalisa Sibanda in a welterweight bout.