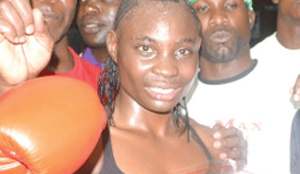 By SHAMAOMA MUSONDA-
NEWLY crowned World Boxing Council (WBC) Silver female bantamweight champion Catherine Phiri says she is still hungry for more success.
Catherine said she was delighted at her newly found status but wanted the WBC proper bantamweight title held by Australian Susie Ramadan.
And Catherine’s manager Chris Malunga revealed that the WBC has given the Zambian lass a WBC proper title shot and that dates would be announced later.
The WBC Silver belt is the second highest title in the WBC hierarchy after the WBC proper and is followed by the WBC International and goes down to Africa Boxing Union (ABU).
In a post-bout interview at the Government Complex at the weekend, Catherine said she was happy to be a world champion and especially a WBC champion but that the Silver title was not enough for her.
“I am happy that I have now got a third belt but I am not done yet. I want to challenge Susie Ramadan for the WBC proper title and then I would have achieved my goal and can think about hanging up my gloves,” she said.
Catherine took the vacant WBC Silver title after knocking out German Pia Mazelanik in the third round after the European was outsmart and outpunched.
“Honestly, I expected more from Pia but I am not complaining. I am happy I won and I can look forward now for greater things,” she said in post bout interview that the German shunned to the rage of Malunga.
Malunga said it was disappointing that the Germans opted to snub the press as that was an act of unprofessionalism and while praising the boxer, the Oriental Quarries Boxing Promotions (OQBP) manager had few kind words for her coach Christian Hiller describing him as an unseasoned trainer.
But Malunga was a happy man with Catherine’s win and also revealed that the WBC, whose vice-president Houicine Houichi was present during the fight, had given a title shot to Catherine to challenge the current champion.
“We are happy that we are world champions but we are not resting at all, we shall give Catherine a few weeks rest then get back to work and start looking at the WBC proper title, we shall make announcements about the dates soon,” he said.
And WBC International welterweight champion, Charles Manyuchi said beating Patrick Allotey of Ghana is a sign that he can go far in the sport.
“I am happy I defeated him (Allotey), he was holding too much and I like my style of fighting. I always had the bout under control though I must admit he is a good boxer but I managed to overcome him,” he said.
When asked about his failure to kill off the fight and in the process exposed to punches as he did in the second round that resulted in a cut, Manyuchi said he got the cut after he was head butted by Allotey.
And the Allotey camp cried foul after the loss and attributed it to a cocktail of reasons which ranged from poor boxing tactics from Manyuchi to the referee and to the venue among others.
Allotey’s coach Kwasi Asane Ofori said Manyuchi was ‘rubbish boxer’ who will not go far and only got the win thanks to South African referee Sylvia Makaida who stopped the fight in the eighth round for Manyuchi to take a technical knock-out.