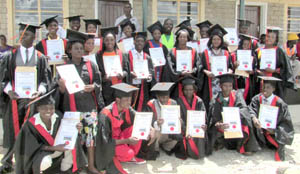 •A GROUP of Build It International graduates pose for a picture.