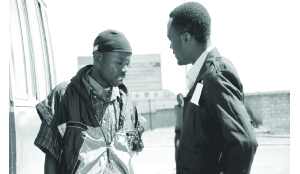 Some of the thrilling scenes in the movie LSK Heroes

By GETHSEMANE MWIZABI –
DUE to popular demand, LSK Heroes, the new Zambian movie depicting the ills of Gender Based Violence (GBV) runs again at fresh view cinema from of April 10, 2014.
This follows the response the Muvi Television production received during its premier last Friday in Lusaka.
Producer and writer Henry Joe Sakala says the overwhelming response towards the movies clearly shows that the Zambian people are ready for Zambian cinema and they are ready and willing to watch in their numbers,
“This is a multi-million Kwacha industry that can help in reducing the high levels of unemployment. The film industry can give jobs to many people who are skilled in other fields apart from film making and acting,” he says.
LSK HEROES is a film that was written, directed and produced by Henry Joe Sakala. The director of photography was Frank Sibbuku and it is a Muvi TV production.
Executive producer Steve Nyirenda has a passion for local production and this comes as one of the productions aimed at increasing local films at cinemas and on TV.
Featuring a cast of old and new talent, LSK HEROES is a story centred on Patience, an abused wife who decides to leave her abusive husband but gets locked up in the house and her only way out depends on a group of opinionated individuals on a bus. The big question is: Will they turn back and save her?
The cast include: Robby Nyirenda (Goliath), Bibah Ndamba (Patience), Henry Joe Sakala (Security Guard), Mulenga Lungu (Bus Conductor), Gordon Mutale (Pangani), Timothy Chirwa (Businessman), Robby Kalijo (Bus driver), Christine Ngoma (Champion’s mother), Rita Bwalya (Hooker), Dorcas Mutale (Mercy), and D’nice Chipampe (Drunk).