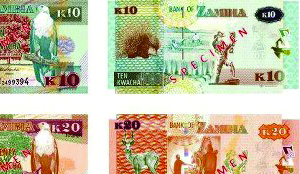 THE Kwacha was under pressure most of last week trading on the back foot against the dollar, weighed down by strong interbank and corporate demand to see it touch an intraday low of K6.385/6.405 on Friday.

Tuesday’s trading saw the local unit closing the day at K6.320/6.340 and the following day the market opened unchanged from the previous trading.

The kwacha is likely to trade range-bound in the current environment with factors of demand and supply being the main drivers of the currency pair’s next move.

And the copper prices slightly changed on Friday but were set to log its biggest weekly loss in seven weeks after the United States (U.S) withdrew liquidity.

According to the Reuters, three-month copper on the London Metal Exchange (LME) edged down by 0.1 per cent to $6,636 a tonne, after closing little changed in the previous session.

Copper prices have dropped by 1.9 per cent this week.

China’s markets were closed on Friday for a second day, while many continental European markets are set to reopen after a May Day break. The LME will be shut today.