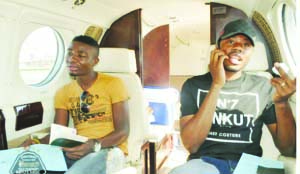 •ZAMBIA star players, Nathan Sinkala (left) and Stoppila Sunzu bade farewell to TP Mazembe president, Moise Katumbi in Lubumbashi on Friday before flying out to France to begin their careers at Ligue 1 side, FC Sochaux. Picture by TP MAZEMBE

TP Mazembe president, Moise Katumbi has said the decision to let the Chipolopolo stars, Stoppila Sunzu and Nathani Sinkala to pursue other challenges elsewhere was proof enough that the DR Congo side does not block players from leaving the club.

Mazembe has allowed defender Sunzu and midfielder Sinkala to further their professional careers in Europe where they will reunite with former Zambia coach, Herve Renard at French Ligue 1 side, FC Sochaux.

Sunzu and Sinkala are tomorrow expected to undergo medicals before formally joining Sochaux, currently lying second from bottom on the table.

Katumbi said whenever players showed their desire to leave for Europe and the interested clubs contact Mazembe and follow the transfer rules, the Lubumbashi-based club allows the players to pursue their dreams.

“When players demonstrate their will to leave for Europe, where a club contacts us and negotiates according to the rules, we never stand in the way of their departure. Here is a new proof,” Katumbi told TP Mazembe website when Sunzu and Sinkala visited him at his Lubumbashi residence on Friday to bid farewell.

The Katanga Province Governor also hailed the way the negotiations between Sochaux and Mazembe were conducted saying the transfers were done in a professional way where contracts and rules were respected.

Katumbi wished the duo the best of luck in France while Sunzu and Sinkala also thanked him for the support he rendered to them during their stay at Mazembe.

Sunzu, who will be making his second stint in France after a brief spell at Ligue 2 side, Chateuroux, clinched a three-year contract worth €1 million (about K7 million) at Sochaux while Sinkala is joining on a six-month loan deal with an option for a permanent move.

The 24-year-old Sunzu, who is Zambia’s defence kingpin, is heading to Sochaux after defender Sebastian Corchia left the club.

It will be a dream come true for Sunzu, who last year desperately wanted to leave Mazembe for greener pasture in Europe.

In January last year, Sunzu trained with English side, Reading with a view of being offered a contract but returned to represent Zambia at the 2013 Africa Cup of Nations (AFCON) without clinching any deal.

Sunzu was claiming to be a free agent, saying his three-year deal with Mazembe expired in December 2012 but the Congolese side accused the Zambian player’s handlers of lying about the contract.

Mazembe instead stated that Sunzu’s contract was only expiring in 2015.

Sinkala, the 22-year-old defensive midfielder, will be making his second trip overseas after a brief loan spell at Israeli club, Hapoel Kiryat Shmona.

The Chipolopolo duo are expected to also link up with compatriot and fellow 2012 AFCON gold medalist, Emmanuel Mayuka at Sochaux.

Renard has also roped in Ghanaian star, Jordan Ayew at Sochaux on a loan deal.

Meanwhile, Katumbi has refuted reports that former Ghana skipper and central defender, Stephen Appiah will be heading to Mazembe.