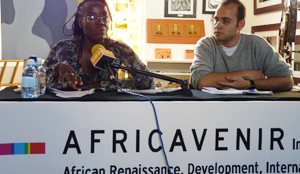 AFRICAVENIR has partnered with Sercine of Brazil to showcase 10 African short films at the upcoming  Festival Sergipe de Audiovisual, which takes place from 19 to 25 July in Sergipe, Brasil.
Hans-Christian Mahnke, director of the Namibian section of AfricAvenir, has curated an African Short Film Section at the festival, which will begin in less than a month time.
According to a statement by AfricAvenir the partnership aims at getting the Brazilian public to discover a cinema they usually don’t have access to, and attract Brazilian audiences to cinematic products from Africa, relevant to the African rooted Brazilian society.
This has been done, to promote audio visual products from Africa.
AfricAvenir is a non-governmental and non-profit organisation engaging in political education and information dissemination both in Africa and in Europe.
Part of the goals of an African renaissance that is to root African development on the reality and culture of African peoples and to re-invent and re-construct the African continent according to African priorities and values.
The overall aim is to contribute to the recovery, rehabilitation and imaginative recreation of African civilisation, culture and history in order to devise new ways of thinking, behaving and organising both the African societies and the emerging HGlobal VillageG.
As for the selected films for the Festival Sergipe de Audiovisual in Brazil, they include Namibia s sCries at NightC (directed by Oshosheni Hiveluah) and  My Beautiful NightmareM (directed by Perivi Katjavivi).
Further films come from Kenya, Zimbabwe, Ethiopia, Uganda, Morocco, Cote d Ivoire, Democratic Republic of Congo /Burkina Faso. See list below.
Some of the selected films are:
My Beautiful Nightmare (Namibia)
“My Beautiful Nightmare”, directed by Perivi Katjavivi, 12 min, 2012, is a film about a young woman bruised by the city, dreams of escape and the freedom of her childhood.
A girl spends her evenings prostituting herself out on the streets of Windhoek. But when a client roughs her up the experience leaves her shaken and forces her to rethink what she’s doing and how far she has come from the sweet little girl she used to be.
Awards
Best Actress award, Namibia Film and Theatre Awards, 2012
Radwan El-Kashef Independent Shaba Foundation Award, 2nd Luxor African Film Festival 2013.
Lezare – For Today (Ethiopia)
“Lezare – For Today”, directed by Zelalem Woldemariam, 14 min, 2010
A small homeless boy, Abush, wakes up hungry early in the morning in a small village. Right in front of where he is sleeping, there is a bakery. He can smell the bread, but he does not have any money. He starts to beg to buy bread but no one pays him any attention. The villagers are busy preparing for the tree-planting event that afternoon. Finally, an elderly man gives Abush some money, but asks him to help with the tree-planting first. But, the day is long and getting food is so hard…
Awards
In total nine international awards, including Best Short Film Youth Jury Award, African Film Festival, Tarifa, Spain, 2010
Best East African film Award, Zanzibar International Film Festival, 2011
Best Short Film, Kenya International Film Festival, 2010
Sharing Day (Zimbabwe)
“Sharing Day”, directed by Tsitsi Dangarembga, produced by  Nyeria Films, Zimbabwe, 17 min,2008, Shona with subtitles in English
This UNICEF funded short film depicts the story of Tabitha, an AIDS orphan, who is being taken care off by her aunt, who can’t provide her with a nutritious diet. When Tabitha turns ill, her classmate Tino and her mother show persistance and care for the child.  A sad, yet positive, story about the realities of families living with AIDS.  Note: Music with and from Plaxedes Wenyika.
Awards
Nomination Best Short Film, African Academy Movie Awards, Lagos, Nigeria, 2009
Nomination for Plaxedes Wenyika, for her role in “The Sharing Day”, National Arts Merit Awards, Harare, Zimbabwe, 2009
Legend of Ngong Hills (Kenya)
“The Legend of Ngong Hills“, directed by Kwame Nyong’o, produced by Apes in Space, 10 min, 2011, is a traditional Maasai story, about the creation myth of these magnificent hills that backdrop present day Nairobi. The film turns this oral folktale into an action-packed animated adventure, using an aesthetic based upon the Makonde sculptural style from eastern Kenya.
Awards
East African talent award, Zanzibar International Film Festival, 2011
Best Animation Film, African Movie Academy Awards, Lagos, Nigeria, 2012.
Best Animation Production, Kalasha TV and Film Awards, Nairobi, Kenya, 2011