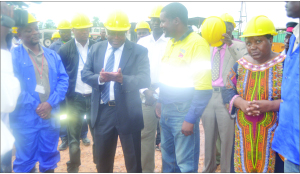 THE investments in electricity expansion projects that Zesco Limited has embarked on in the Northern Province are expected to end the perpetual problem of low power voltage, residents have been subjected to in the region.

The region has been experiencing low electricity voltage due to low supply of electricity as most of the power stations lacked capacity to produce sufficient power to meet the ever-growing industrial, commercial as well as household use.

The Government, through Zesco, is currently carrying out major power upgrades and expansions in order to increase power voltages in the country.

Among the projects Zesco is working on, is the expansion of the Lunzua power project which will be upgraded to 14.8 megawatts (MW) once completed in 2014.

So far, the Government has spent more than US$32 million on the construction of dams and water runways which will be tapping water from Lake Tanganyika.

Once completed, the project whose total cost is $51 million would increase generation capacity and improve the quality of power supply in the region.

The first transformer is expected to be switched on in July 2014, while the last machine is scheduled for September the same yeatr and currently, the contractor is building dams and waterways which will tap water from Lake Tanganyika in Mpulungu District.

Lunzua power station manager Ernest Banda said more than US$32 million had been spent on the power plant and that Zesco had, however, a shortfall of $19 million to complete works at the power station.

“We have a shortfall of about of $19 million to complete works at the power station and the contractor has done 61 per cent of the works so far,” Mr Banda said.

He said the late arrival of pen-stock materials for river diversion was affecting the works at the power station and appealed to the Government to assist in swift clearing of the materials saying the plant was strategic.

Minister of Mines, Energy and Water Development Christopher Yaluma says the completion of the Lunzua power project in Mbala would improve supply in Northern Province which had been experiencing low voltage and intermittent power cuts like the rest of the country.

Mr Yaluma has also urged Zesco to make sure chiefs’ palaces and schools are connected to electricity power grid in the province.

The minister who toured the power plant recently, said he was impressed with what had been done so far and urged Zesco to ensure that high standards were adhered to by the contractor.

“I am impressed with the works done on the power plant, Government will resolve the challenges so that the contractor moves at the fast pace with the project,” Mr Yaluma said.

He said reliable electricity was one of the key drivers of the country’s economic development.

Mr Yaluma said the power connectivity in the province should not only end in public facilities but that residents should apply to Zesco for electricity connectivity for their domestic and commercial use in order to economically develop the province.

“The availability of electricity is meant to enable people enjoy improved standards of living and quality of life.

“The Patriotic Front (PF) Government will continue to invest in the rural electrification programme in an effort to alleviate poverty and ensure that all Zambians enjoy social economic development,” said Mr Yaluma.

Zesco director of distribution and customer services Kenneth Muteto, who was part of the entourage, said Zesco was in talks with the secretary to the treasury for the release of the money so that works continued and finished as scheduled.

“The concerns will be attended to so that works continue, we are discussing with the secretary to the treasury to find out when the money allocated in the 2014 national budget will be released to Zesco,” Mr Muteto said.

Among the major developments in the province is the $650 million dollars project which Lunzua power authority (LPA) intends to carry out.

Under the agreement, a 66 KV line will be constructed from Kundabwika and Kabwelume power plants to join the existing national grid at Zesco’s Kawambwa substation in Luapula Province.

Zesco is also working with the Rural Electrification Authority (REA) on the programme of power grid extension project across the country, Northern Province inclusive which is further going to ease the challenge of low voltage.

The other project is the K2.9 million Mukosa grid extension power project in Mungwi District, Musa, and Chishimba area in Kasama District.

The grid extension project involves construction of 840 metres of 11kv overhead lines which will immensely contribute to the reduction in the low power voltage.

The connectivity of the REA project will benefit a lot of people who have no electricity and contribute to industrialisation of the province.

As industrialisation evolves in the Northern region, there is need for more investments in the power up rating and extensions.

Once all the power investments are complete, the province is expected to be self-sufficient in electricity looking at the volume of megawatts involved.