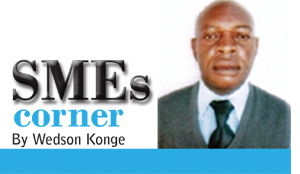 WE enter 2014 with economic pronouncements from the Government on the reintroduction of Industrial Development Corporation (INDECO) which comes as a good package for small and medium enterprises (SMES) in the sense that the sector will have a mother to look to.

INDECO in this country can only revolve on good political climate, free corrupt civil service and a vibrant private sector.

It is no doubt that this country enjoys a good political climate going by the succession and good handing over of one Government to another administered by different political parties.

One hopes that the civil service which forms the bulk administration of the Government in power at any given time becomes completely free from traces of corruption.

The introduction of plural politics ushered in the running of various private businesses giving opportunities to several enterprising individuals to start running their own businesses.

This column early this year did allude to the fact that SMEs are run like headless chickens with no guidelines from the mother body and that the initiatives are left alone to individual brilliance of the business owners.

In countries where small businesses have been promoted to the fullest in terms of Government support, they have been indentified as the engine for economic development.

The Government has reintroduced INDECO with a clear view to revive the nose-diving manufacturing industries in the country.

This is in line with their manifesto to develop the country by creating more industries and consequently the creation of employment among the youths in the country.

This also will give opportunities to many individuals who have been crying to set up their own manufacturing industries.

I remember early last year, an entrepreneur in Mansa was constantly calling this column so that he could be directed to an institution with researched information on how to set up a processing industry for mangoes, this is because he had the fruits in abundance and they were just going to waste in the due season.

This column was at pains to give such type of the information to the entrepreneur because to start with, it had no where to turn to.

This column looks at the reintroduction of INDECO as part of the solution to such problems and it is our sincere hope that people who will be placed in the offices will be serious with developmental programmes with vast experience and tested practical experience coupled with proper education to lead this sector.

People should not be in offices to work for salaries and allowances but should go in with the passion to achieve the intended results.

Reading the mind of the Republican President in the reintroduction of INDECO, is to strengthen the sector of value addition industries using locally obtained raw materials.

The visionary economist as I call the President, has realised that one way in which the country can develop its industrial sector is through promotion of the manufacturing sector by encouraging value addition through locally obtained materials.

As we start the new year with such important pronouncements from the Government in power, it is our sincere hope that SMEs with the visions of breaking into manufacturing will embrace this pronouncement with both hands and give the maximum support to the Government as it implements this industrial development body which will look exclusively at the development of various industries in this country in order to promote and develop industries in this country.

While the Government formulates this important economic policy, the onus is on the citizens to apprehend this initiative and challenge the Government in this area so that the journey starts at the same pace.

China is the export-oriented country today because of the initiative of its citizens of creating backyard industries producing various products which are exported throughout the world.

Entrepreneurs in China are supported by the Government through the provision of loans and other technical support.