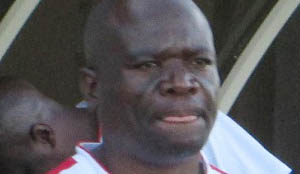 By KALUMIANA KALUMIANA-
MTN Premier Division League champions, Nkana have re-engaged Beston Chambeshi as their head coach, 11 years after the club legend left the Wusakili outfit.
Chambeshi was named as substantive coach following the death of Masautso Mwale in a car accident in May this year.
During his unveiling yesterday morning at Nkana Stadium in Kitwe, Chambeshi said the 12-time league kings would always be part of him and that he was humbled to be back at the club he coached and also won trophies as a player.
“I am back again, this is my team, I belong to this team, my blood is here, I am happy to be back here,” Chambeshi said.
Chambeshi joined Nkana after exactly one year at Konkola Blades whom he joined last July following his dismissal from Power Dynamos.
This is Chambeshi’s second stint as Nkana head coach after taking charge briefly in 2003 when he replaced Patrick Phiri under whom he worked with and won two league titles in 1999 and 2001.
The development will see caretaker trainer, Zeddy Saileti and his lieutenant, Gift Kampamba revert to first and second assistants, respectively.
“We are going to work together and I am happy to work with Zeddy Saileti and Gift Kampamba, these are great names in Zambian football,” Chambeshi said.
Nkana vice-chairperson Patrick Njobvu said Chambeshi has been handed a three year deal.
“To the technical bench you have to make sure you work hand-in-hand and work as a team. Favour is always with us,” Njobvu said.
Saileti said he was looking forward to working with his former coach and colleague at Nkana.
“As Nkana we are a big family we have been doing good things here and through your experience you will add value to the team so we are ready to work with you,” Saileti said.
Chambeshi first game in charge will be this weekend when Nkana host Etoile du Sahel of Tunisia in a 2014 CAF Confederation Cup Group B match at Nkana Stadium in Kitwe.
Meanwhile, newly-acquired Nkana striker Tony Odur has declared his readiness for action in the MTN-FAZ super league.
Odur, who arrived at the Kitwe giants on Monday after completing his move from Uganda’s Kampala City Council Authority (KCCA) on a one year contract, said his target was to help Nkana retain the league title.
The Ugandan international is however cup tied for in the 2014 CAF Confederation Cup as he starred for his former club in the competition.
“Nkana is a good team; I was impressed the time I played against them in the Champions league. I saw that the team was good and I think it would help develop my talent because there is good football in Zambia than in Uganda.
Zambia has been to the Africa Cup of Nations so many times and I think it is because of good teams like Nkana. I won two championships with Kampala City Council Authority so I want to work hard in order to win the league with Nkana. I want to make history,” he said.
Odur is the third high profile signing made by Nkana in the mid-season transfer window following the arrival of defender Amos Simwanza and midfielder Francis Simwanza both from Konkola Blades.
Nkana Club Secretary Ken Mwansa told fazfootball.com that the 29-year-old Ugandan striker is a direct replace for Evans Kangwa who recently an Israeli club, Hapoel Ra’anana on a one year long loan.