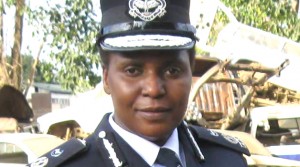 By MAYA NTANDA  and ETAMBUYU SANG’ANDU-
A PENTECOSTAL Church ‘bishop’ in Kitwe has been arrested for sexually abusing nine female church members aged between 14 and 20 on the pretext that he was cleansing them of evil spirits.
Dominic Nyondo, a bishop at Holy Fire Ministry Church, is alleged to have sexually abused the women on different occasions by purporting to cleanse them of evil spirits.
Nyondo is said to have undressed his victims while he prayed for them, ‘anointed’ them with milk, and later had sex with them.
Copperbelt Police Commissioner Joyce Kasosa confirmed that Nyondo, of 853, Ipusukilo Township, was apprehended on Monday and is in police custody.
Ms Kasosa said the alleged sexual abuse and defilements occurred between 2010 and December 2013, in the former council farm area in Kitwe.
“I can confirm that we have a bishop in custody for sexually abusing nine females aged between 14 and 20 after purporting that he was cleansing them of ghosts,” she said.
Ms Kasosa said the victims complained to police over the abuse by the ‘clergyman’.
She said the women led the officers to the scene where the sexual abuse allegedly occurred near a hill in the council farm area.
Ms Kasosa said police had not yet charged the ‘clergyman’ because they were still investigating the matter.
Meanwhile, an engineer from Konkola Copper Mines (KCM) in Chililabombwe has been shot three times by armed robbers who got away with household goods.
Mr Kasuba Kaoma was shot on his left hand and in his stomach by masked armed robbers around 02:00 hours on Thursday.
Mr Kaoma, who is admitted to Konkola Mine Hospital in Chililabombwe, said he was attacked by four masked men who shot him and went away with household goods.
Speaking from his hospital bed, Mr Kaoma, 29, narrated that he woke up at 02:00 hours to prepare for work when he discovered that the sitting room was empty.
He said he then saw the masked men appear with three of them armed with guns.
Mr Kaoma said two of the men went outside as two others wrestled with him while demanding for the car keys.
He said in the process, he was shot in the chest, stomach and on the arm.
“My family and I were attacked by four masked robbers who shot me in the chest and stomach and that was how I passed out,” Mr Kaoma said.
Ms Kasosa said she was aware of the incident and that police were handling the matter.