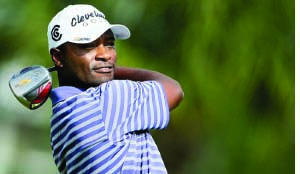 ZAMBIA’S Madalitso Muthiya yesterday made a cut at the R600,000-rich (about K354,000) Vodacom Origins of Golf presented by Samsung tournament at Saint Francis Links in the Eastern Cape, South Africa.

Muthiya fired one-under-par 143 after 36 holes to beat the three-over-par cut and tie for 10th going into today’s third round.

The Zambian golf prodigy started this tournament in blistering form, scoring three-under-par 69 in the first round to have a share of the seventh place before yesterday’s modest two-over-par 74.

According to the Sunshine Tour website, Muthiya is seven strokes behind joint overnight leaders of the South African duo of Erik van Rooyen and Keith Horne.

With this kind of form, making the cut will no longer be an issue for the young Zambian as he set his eye on the top prize.

Muthiya could not have started this tournament on a worse note as he bogeyed the first home before he sunk three birdies on the fourth, ninth and 10th to put him in commanding mood but nerves hit him again as he dropped a shot on the next hole.

He steadied himself after that and went on to sink two more birdies on the 14th and par-four 18th to end the first round in comfortable position on three-under.

In yesterday’s run, Muthiya started stronger and played level on the first two holes before sinking a birdie on the third.

But just like on the first day, Muthiya bogeyed the next hole before birding the sixth and dropping another shot on the eighth.

Muthiya then decided not to attack the pin and scored level-par on all the holes until the last two holes where he bogeyed.

That round two score of 74 meant he made the cut with four strokes off the mark and can hope to push up today.