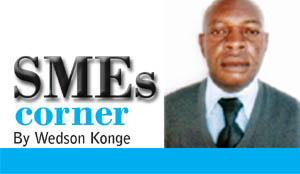 The cost of doing business among small and medium enterprises (SMEs) has slightly gone up simply because communication expenses have also gone up.

The Government on January 1, 2014, implemented the budgetary imposition of 10 per cent excise duty on the price of airtime vouchers sold to customers by Zamtel, Airtel and MTN mobile service providers.

Although the face value of the vouchers have remained the same, the fact of the matter is that the Government now slices 10 per cent from service providers and as such, the value of talk time has also sunk by 10 per cent.

One of the business operation expenses that is very familiar on the income financial statement among all the businesses whether small or big is the communication expense.

Actually telephone expenses to some businesses impute as the direct costs in the sense that without incurring them, the businesses may not record business transactions they are known for.

This is the case of businesses that deal in money transfer services across the country.

Today in this country the transfer of money from one end to another has become convenient to the general public.

This is so because of swift efficiency necessitated by modern technology of cellular phones and internet.

Gone are the days when money was being transferred through telegraphic money transfer and used to take two to three days to reach the intended beneficiary.

But today, within five minutes of transactions one can send and receive money and this is because of the cellular phones and internet availability.

The money transfer service businesses have seen the proliferation of small businesses as agents and commission earners.

One money transfer service business whose headquarters is here in Lusaka and whose name I am going to withhold by the request of the owners, has given employment to more than 200 agents throughout the country and earn commissions as source of income.

Some of the agent centres throughout the country use cellular phones, internet data bundles and computer software to complete their money transfer transactions.

A visit to one of the centres within Lusaka, showed a queue of customers sending money while others were in the process of receiving.

The agent flanked by the manager from the head office told this columnist that the loss of value of vouchers had already started affecting their businesses in that money used to spend on talk time and data bundles for internet use in a day has almost doubled.

However, it must be appreciated that out of the population of more than 13 million people in this country, statistics gathered as a result of registration of sim cards has revealed that more than 6 million people have registered as users of cellular phones prompting the Government to look to this sector for raising revenue for its developmental projects.

Small businesses in this country are the most affected in the sense that they depend on cellular phones for communication unlike big businesses that have wider selection of electronic gadgets to use such as internet, fax machines and so on, which are very fast when it comes to sending messages and other related services adduced.

In the short term, the cost of doing business for SMEs who depend on the use of cellular phones and converted data bundles for internet use will go up as well.

However in the long- term, when businesses are expected to submit income tax accompanied by sets of accounts for tax purposes, the telephone expense which is the allowable expense for tax purposes will be used to reduce the business profit and hence the tax on profits to be paid will be less.

Further interviews with the manager revealed that Zambia is already the highest tariff burdened as far as telephone charges are concerned in the region and the excise duty imposed on talk time is yet to make this country very expensive talking on phone.

However, it is hoped that the Government in years to come will look favourably on SMEs and consider their plea to help them reduce the cost of doing business in this area of Government policing.