TWELVE-TIME League champions, Nkana yesterday unveiled their 55-seater luxury team bus worth US$130,000 (about K910,000) in Kitwe to ease the club’s transport challenges.
Club chairperson Evaristo Kabila said at the unveiling ceremony at Nkana Stadium in Kitwe that the club was very grateful to Mopani Copper Mines for purchasing the bus for the team and promised to look after the vehicle well. 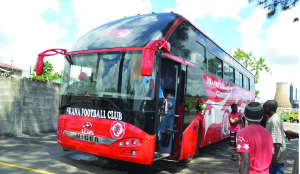 • NKANA Football Club’s new 55-seater Higer Bus which was handed over to the team at Nkana Stadium in Kitwe yesterday. Picture by WILSON CHABINGA

“Apart from easing the transport challenges that we have been facing, the bus will boost the morale of both the players and the supporters,” Kabila said.
“It will also enhance the image of Nkana Football club as a leading club in Zambia.
“I have no doubt that such incentives being off to the team, players will also offer their best and go out for nothing less than the league title.”
Meanwhile,Kabila’s predecessor and  Mopani’s Chief Financial Officer John Chiwele  said the mining firm was honoured to be associated with Nkana.
“The purchase of a new luxury bus for Nkana Football Club has been long overdue,” Chiwele said.
“It is for this season that as Mopani, we are glad that thus has finally come to pass and today we are here to handover a brand new  55-seater luxury Higer bus bought at a cost of US$130,000.”
Chiwele added that the bus will bring a sense of pride and prestige to Nkana as they embark on an attempt to reclaim the league title they lost to Zesco in the 2014 season.
And Nkana are targeting to raise US$1 million from membership fees to help fund the club’s  refurbishment programme of its estates.
Nkana are seeking funding to rehabilitate their estates that include their 70 per cent stake in the Mine club building located in Nkana West in Kitwe.
Kabila said the club’s target was to initially raise US$250,000 for the ambitious plan.
“We are need US$1 million towards refurbishment of our  estates,”  Kabila said.
“I believe with the massive support that we have we can do it. If you check we have more that 17,000 supporters, we can actually raise more than 25 per cent of this money and I am talking of US$250,000.”
Kabila said Nkana would ask for a membership fee of K250 from its members countrywide to help reach their target.