By JOWIT SALUSEKI
AUSTRALIA-based Zambian singer Larry Maluma is this month-end slated to come back home to release and promote his Ulemu album, a project which first hit the market 30 years. 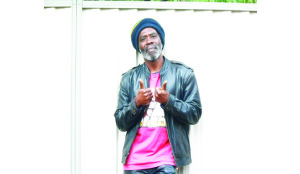 Maluma is an accomplished musician, composer and singer who sings in a combination of English and Zambian languages like ci-Nyanja, ci-Bemba and ci-Tonga and adopts different music styles which he has used to blend his own brand of roots music.
Despite more than two decades of being in “exile”,  the music
export to Australia is still attached to the country as evidenced by his effort to keep Zambian roots music on course internationally.
Being abroad for many years does not change anything for Maluma who has shaped up his own style of music fusing in African roots reggae with an influence of jazz, funk, soul and Jamaican ska.
The resulting unique sound has put some of his songs at the top of the Zambian charts.
He told Times Weekend entertainment from Australia that he will be heading back home to promote and enable Zambians sample songs on the album which he offloaded before migrating to Australia.
‘’ I will be heading back to my homeland of Zambia through South Africa via Zimbabwe on a promotion tour at the end of this month to release and promote my debut album, Ulemu which means respect in ci-Nyanja. The album will
first be released in Zambia before it is released worldwide. I intend to take the album on the road in summer after it is released in Australia in spring’’, says Larry.
Since arriving in Australia in 1985, Maluma has broadened the Australian perspective of African music by releasing several albums with African rhythms with Ulemu being the singer’s 12th studio album.
He has also released and more than 15 music video clips which have been aired on the Australian ABC programme, Rage.
Ever since he cut his music teeth, Larry has been renowned for offloading albums such as Ndakondwa and Bakaindi (ancestors), a project from which a radio favourite titled Jah Nation is lifted from.
Larry’s first two vinyl releases were Confusion (1987) & One Man’s Poison (1989).These were followed by the albums, Hallelujah (1991)Man & Woman 1993, Nuff is Enough (1996).
Follow up releases include the Motion (1997) & Roots & Herbs ( 2000).
Since it’s release and launch “Roots & Herbs”has been played on radio stations across Australia, including Triple J, Triple R, PBS and ABC regional stations. As with previous albums Larry addresses issues of racial harmony, equality & social unity.
Some of Australia’s finest musicians are featured on Larry’s album releases. Vika and Linda Bull appeared as backing vocalists on his 1993 release “Man and Woman”. Deisel also appears on this album.
On the album “Hallelujah”, Nichaud Fitzgibbon contributed backing vocals.With many of the players regarded as Australia’s leading session musicians, the individual and collective brilliance of the musicians respectively assures a diverse sound which encompasses complex African rhythms, Jamaican ska and luscious jazz horns.
Larry and his 10 piece band were asked to headline Apollo Bay Music Festival, Bellingen Global Carnival and the Globe to Globe World Music Festival 2001.
Larry & his band Roots & Herbs performed again at the Globe to Globe World Music Festival October, 2002. In 2003 Larry & band were special guests of Angelique Kidjo when she played the Prince of Wales, Melbourne .
At the beginning of 2004 Larry was asked by two members of MMM International to assist with the Zambian project : “The African Dream”. A project which assists underprivileged children in Zambia.
Larry graciously donated his songs which were compiled on the compilation “Larry Maluma -a good cause”. It contains a mixture of songs sung in 2 of Zambia’s 72 languages, ci-Bemba & ci-Nyanja.
The songs chosen were from 5 of Larry’s 7 album releases.
Half the proceeds from the sale of this CD went to the “African Dream” project.
Larry’s 8th album, Makani Angu (my story) was released in January, 2005 to rapturous applause and is being touted as his finest album to date. Makani Angu is a watershed in Larry’s career.
The album is smothered in deep roots, hypnotic rhythms,
tribal beats and a waterfall of percussion. This album will confound expectations, delight diehard listeners and convert the un-initiated.
With such a rich music career background, Zambians will be waiting with an anticipated breath to welcome one of their own sons as he comes back to his roots.