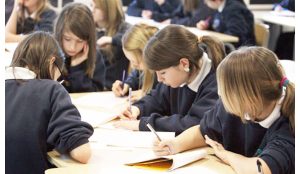 •PUPILS need time to enable them pass examinations at school.

First time meeting the grade 10s when they had reported, I introduced myself to them and they did the same.
Afterward, in a quiet voice I asked them, why are you here? They kept quiet, looked at me, others smiled. I asked them the same question, this time around I expected them to give me answers.
Different answers were given. Some said it was the decision of their parents, because they had passed the grade nine examinations, others said they wanted to have a great future hence picked a school that could usher them into their future.
After listening to their answers, I affirmed that their answers were correct based on which perspective they were looking at.
I had asked the question because I wanted them to acclimatise themselves with the environment and to know what was ahead of them.
For example, if you are in an environment and you are not sure why you are there, when you are going to leave the same environment and where you will go afterwards – it would be difficult for you to understand and appreciate the environment.
If you as a pupil don’t understand the reason why you are in school, you will always be a passive member of the class and the school at large.
During my 11thgrade in 2006, I decided to visit my grandfather in Mwansakombe village of Samfya district. One day my grandfather found me sitting on a sleeping chair while studying, I was holding a pen in my hands and a draft book.
He came towards me and asked a question on what I had in my hand. I looked at myself thinking what wrong I had committed. I looked at him and said nothing, and then he said check what your hand is holding. I responded by saying, “I am holding a pen”. He requested that I gave him-which I did.
Then he said, Rodrick! This pen you are holding can be equaled to the spear in the hand of a hunter. Long time ago our forefathers used spears in hunting before western civilization reached here and introduced guns.
A spear in the hand of a hunter represented his influence in the community, it was the again the decider of the availability of the meal for his family, if he used it well whilst hunting he could expect a lovely dish for his wife and children.
If he went in the field and he missed hunting that meant on that day his family will dine nshima with ‘kalembula’ potatoes leaves. Sadly, if he felt lazy by not going for hunting; it meant his children will only admire what their neighbours would be dinning.
The pen you have in your hand is a spear in the hands of a hunter! Rodrick, in your hands you have a pen; the way you will use it will determine your influence in life. It will also determine the meals your children will be having.
After the above discussion with my grandfather I took time to appreciate the qualities of a hunter which a pupil should adopt if he/she will be able to make it in her academics. The following are some of the qualities possessed by a hunter;
He is focused; during hunting hunters are focused and avoid distractions were possible, if he has gone hunting he won’t shift his attention to farming or anything.
If you will be a successful pupil avoid anything that can distract you from concentrating on your academic work.
They are fierce, hunters are sometimes confronted with challenges during their hunting sessions, but they don’t give up!
Sometimes hunters team up, it is not always that they work in isolation. As a pupil treasure the concept of working with your friends in your academics by belonging to study group.
They are determined, no hunter will go hunting with a doubt about the possibility of hunting any animal. When you are in school be determined that you will do well.
They don’t give up, it is not always that a hunter will be able to hunt animals. As a pupil there will be times that you will be unable to pass a test but that should not kill your morale to study hard. Don’t give up!
They are patient- hunting is one field that requires one to be patient because sometimes hunters are able to chase animals for kilometers. There are times as a pupil, despite how much you study nothing will be shown for your hard work, however you have to be patient by continuing studying hard- your hard will ultimately pay off.
For comment write to email: rodrickmakupe@yahoo.com. Facebook page: Mr Makupe. Contact:0979700937