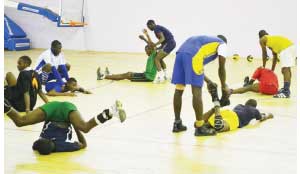 •VOLLEYBALL players exercising at the National Sports Development Centre in Lusaka in readiness for the 2014 World Cup qualifiers slated for Kenya. Picture by SHAMAOMA MUSONDA

By SHAMAOMA MUSONDA –
THE national volleyball coach Peter Kombaniya says the team will remain unfazed by various reports that put the trip for the World Cup qualifiers in doubt due to financial constraints faced by the Zambia Volleyball Association (ZAVA).
Kombaniya said in an interview in Lusaka yesterday that the team had remained focused on training and that the issue of looking for money was not a concern to them.
He said all the ZAVA executive assured them and that brought some relief to the players who continued on their path of training in readiness for the Kenya trip.
“Our focus is making sure we are at our best by the time the tournament starts. And we are making very good progress. The issues of money challenges remain a problem to be solved by people tasked to do that and that is the executive.
“The players have read an article or two in the papers but the executive is an able one and we are pretty sure that we will manage to make the trip. So the players have remained focussed on training,” Kombaniya said.
The World Cup qualifiers will run from February 5 to 11 in Nairobi.
ZAVA is faced to a tough challenge of raising K202,000 to enable the team make the trip to Kenya to play in the final stage of qualifiers for the 2014 World Cup to be staged in Poland.
ZAVA general secretary Charles Haambote confirmed that there was a financial challenge to make the team travel for the crucial games, the stage the team has never reached.
“But we are still hopeful, there are one of two areas where we believe money can come from and we are making follow ups. Meanwhile, we are happy with the progress the team is making in training,” he said.
ZAVA has requested for money from the Sports Council of Zambia (SCZ) to enable the team make the trip.
All eyes are set on SCZ especially after a public spat between the two bodies at the end of last year following a five-year ban the national sport governing authority slapped on ZAVA.
Sports Minister, Chishimba Kambwili, however, reversed that punishment.
And Kombaniya said the team’s fitness level was rising and was almost at its required peak for a tournament of such magnitude.
“The two weeks we have been in camp have helped us a great deal, we have had our challenges where some players were dropped because they have examinations coming and one also got injured. But we have 17 players here and we should be trimming to 12,” he said.
Meanwhile, Botswana, one of Zambia’s opponents in the five-team Group U, left for Algeria for a series of friendlies in their continued circuit of preparations for the qualifiers.
The Botswana’s women also left for Mauritius for preparations of the qualifiers which will also be played in Kenya.
Zambian women are set to watch from the living room after failing to qualify to the last stage.