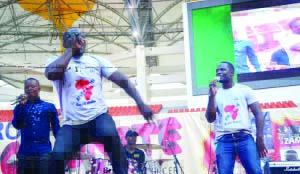 By CHRISTINE MWAABA  –
IT was a joyous celebration when various gospel artistes performed and enthralled the audience with uplifting Christian music last weekend at Heroes National Stadium.
The mood of oneness was exhibited at the one-off music concert as people from all walks of life turned out in large numbers for the concert at the stadium.
The concert, organised by Christian Arts Promotion (CHAPRO), featured international musician and Congolese gospel star Mike Kalambai with compatriot Zamar who performed much to the delight of the audience.
The visiting musicians shared the stage with a variety of local gospel artistes who played the best collection of the celebrated gospel music in Zambia.
Performances of Matthew Ngosa, Ephraim, Kings Malembe Malembe, Suwilanji, Abundant Praise, Potipher and Abel Chungu were a pleasurable experience for the spectators.
The Africa Unite gospel concert was scheduled at a right time when the country celebrated its 51st Independence anniversary which followed shortly after the October 18 national day of prayer and fasting.
Both the international and local artistes later proceeded to perform at the Levy Mwanawasa Stadium on the Copperbelt where they put up a spectacular show.