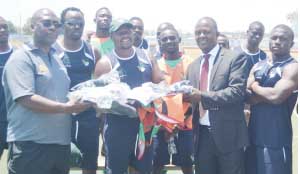 MOPANI Copper Mines (MCM) yesterday donated sports kit worth US$8,000 to the Zambia Sevens team that leaves for South Africa today for the Rio 2016 Olympic Games Africa Men’s Rugby final qualifiers.
The kit consisted of two sets of jerseys, round neck T-shirts, warmers, bags, training jerseys, referee’s kit and golf shirts.
MCM public relations manager Nebert Mulenga said during the handover at the Olympic Youth Development Centre (OYDC) in Lusaka that the mining firm has had a good relationship with the Zambia Rugby Union (ZRU).
Mulenga said that was why MCM, the sponsors of ‘Men At Work’ Diggers Rugby Club, wished to continue with the bond and was happy to extend the gesture to the Sevens squad.
ZRU president Clement Sinkamba described the gesture as one which came at a very crucial stage, especially that the players needed such motivation.
Sinkamba said the donation would help the association lessen some expenses and make the team want to give back to the country by winning and qualifying to the Olympic Games.
Coach Reuben Mkandawire said the donation came at the right time as it would help the players perform even better knowing that the nation was rallying behind them.
“We will definitely come back with good results because this is not only for the qualification, but also to move on top on the African ranking table. We hope to move from the current 12th position in Africa,” he said.
The team is in Pool B with pre-tournament favourites Zimbabwe, Uganda and Nigeria while Pool A has Madagascar, Kenya, Senegal and Mauritius with Tunisia, Namibia, Morocco and Botswana making Pool C.
Zambia will start her campaign on Saturday against Uganda before playing Zimbabwe and will wrap up the day’s fixture against Nigeria.
At the end of Day One, the teams will be ranked from one to 12th according to their pool match results. Teams that will finish in the top eight will compete in the main Cup quarters while those ranked ninth to 12th will play a round-robin tournament to determine their position at the tournament.
The winner will qualify to Rio while the three runners-up will go to an international second chance tournament.