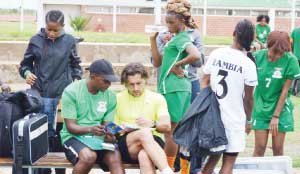 By SHAMAOMA MUSONDA
ZAMBIA coach Patrice Beaumelle says women football in the country is on the rise and that qualification by the Under-17 team to the 2014 FIFA Costa Rica World Cup finals is just but the start of the many better things coming.
Beaumelle, who has  joined the Zambia women senior and Under-17 coaching benches, said the enthusiasm in women football was high and thus the end result was growth in the game.
Speaking in an interview in Lusaka, the Frenchman said there was also willingness to learn from the women and that this was putting them in good stead in their game development on a tactical side.
“These are good moments in women football in Zambia. The enthusiasm is quite high in the players and officials and that is a good sign. The game is definitely on the rise in the country and we have to push them on,” Beaumelle said.
Beaumelle said his experience with women football in France taught him that training a female player was easier than men.
“I find it a lot easier training women players because their brains are ready to take in a lot of information and put it to use fast. That is not the case with male players, with the guys, you really have to emphasise again and again,” he said.
He said the ability by the women to take in more instructions puts them on a better footing tactically in a game and that particular factor was now manifesting itself in the Zambian female players.
Beaumelle said there was a lot of skill in the women and adapted quickly on how to move the ball on the pitch than the men who would rather concentrate on physique and pace.
The coach said with Zambia going to play at the Under-17 World Cup and the Under-20 squad having a decent attempt at the World Cup qualifiers, the energies being produced in the women game was good.
Beaumelle also noted that there was a lot of skill in the Zambian players with the natural touch of the game prominent everywhere but that it was important for the players and coaches to continue working hard in raising the levels of the game.
“We have to work, work, and work. The natural touch about Zambian football is good but we need to put in all and also speak the same language as coaches. So that all teams play the same,” he said.