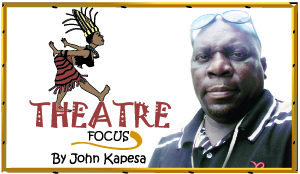 THE run-down, abandoned and derelict Kamenza Theatre club even in that wrecked state is probable to host this year’s World Theatre Day from a Zambian perspective and generally spur theatrical activities in Chililabombwe.

During the week, Edward Lange and I drove to Kamenza theatre club to authenticate, corroborate and consult with the theatre artistes resident in this border town and see what help they really would need to get Kamenza back to its feet.

Lange is one of my good friends, a theatre artist, advocate and consultant on several issues particularly n strategic planning.

In the company of veteran theatre actors based in Chililabombwe; Raymond Kombe Kaoma and Daniel Munthali, we met the District Commissioner Stuart Chitumbo who acknowledged that he was pleased to hear of the revival of theatrical activities in his town, further sharing his worry over where the young artistes of Chililabombwe had gone!

In his office Chitumbo explained, “My plans are to see not only Kamenza theatre club revived, but also other social groups like Muzumba dance troupe, so we need the corporate world to come on board and partner with us.

“We have talented young men and women in this town who need to be engaged to help sustain their living and keep off mischief.”

Chitumbo, a pleasant elderly man was right, and with the view that Chililabombwe will host the World Theatre Day, he pledged filial support and said he would absorb all government departments under his nose including that of the Town Clerk’s to ensure the activity succeed.

However, later I spoke to Prince Lamba who openly admitted Chililabombwe had no Office but that he had twinned Chingola and the border town with one officer Mateyo Ngembela who mainly operated in Chingola.

Understandably, Lamba explained that his office was understaffed with only three cultural officers to man Ndola, Kitwe and Chingola, and that he had merely aligned his three officers to two or three districts.

Nevertheless, Lamba appealed to the cultural department in Lusaka to send more cultural officers as the Copperbelt province had more towns.

Back to Kamenza; After visiting the DC, Lange and I elatedly with beaming faces left to meet the local artistes at the Rugby club where equally before the visit for an-on-the-spot-check of the uninhabited, crumbling and ruined Kamenza theatre club, the following issues arose as salient needing immediate attention;

An interim committee to steer the revival of activities at Kamenza theatre club to be coordinated by Raymond Kaoma and Kennedy Banda was established comprising others like Deluxe Kausseni, Truvence Kalimbo, Brighton Mooba, Dan Munthali, Charles Munthali, Gilbert Katongo and James Kasiluka. Others are Davies Chisanga, Victor Mawere, Nelson Mulenga and Isaac Phiri.

A visit to Kamenza theatre club revealed a tearful discovery with the neglect that has led to the collapse of the infrastructure.

While the auditorium and wooden stage appeared intact with no leakages, the dressing and change rooms were completely destroyed, needing complete overhaul.

Unwanted grass and weeds have overgrown surrounding the club premises with unpruned trees overshadowing what once was considered a significant and spotless building and harboured some of Zambia’s finest actors like Joseph Sumaili, David Mubita, Webster Kamaloni, Fanwel Phiri, Chrispin Lukama,   Kennedy Banda and the late Olipa Mbewe and Friday Ng’andu, among many others.

Historically, Kamenza theatre club is not a new club, but one of the little theatre houses constructed at the prime of copper mining in Zambia in the early 1930s.

Like in other mining towns, the expatriate whites reminisced their Broadway theatre back in the United Kingdom by staging British plays in Zambia for entertainment, but then, when ‘Zambianisation’ knocked at the door and came in the Zambia Consolidated Copper Mines (ZCCM) things changed; more Zambians took over the playhouses on the Copperbelt with locally-oriented plays occasionally taking centre stage.

Kamenza theatre club before its ‘death’ saw big productions such as Kabwe Kasoma’s Married Bachelor in 1991 directed by Kennedy Banda and won first prize during the national theatre festival held at Venus theatre in Kabwe.

Originally, ZCCM planned to rehabilitate Kamenza theatre but things went wrong instead next-door to the club, ZCCM started working on the Sports Symposium which I remember during its official opening in 1992 when I covered the official guest Vera, wife to the late President Fredrick Chiluba.

The theatre club still has vivid inscriptions on the advertising podium to show the last play staged by the club Gone with a Sugar Daddy by  Light Musonda when we were paying K2.00 to watch a play.

Now, it has been acknowledged that World Theatre Day an annual event celebrated on March 27 will go to Chililabombwe particularly at Kamenza theatre with classic activities already planned for this day.

The Kamenza steering committee coordinator Kaoma said the event will fillip and kick-start activities in town, but appealed for a play script so that the team can participate in the Yezi Arts April International and NATAAZ festival this year.

“We are looking foward to partnering with all those who wish us good; we want a good play that can rejuvenate and spur our residents before we sit down to draw up areas of concern for the rehabilitation of Kamenza theatre club,” Kaoma said.

One actor Joseph Samalesu, now 45 of Ndola, a prominent feature in the television series What a Life remembers his stay at Kamenza theatre when he worked for ZCBC in 1988, and recalls having acted in Hooked on Beer, Betrayal in the City, Educating Mwalimu, Black Mamba and Mkhuzya Where is my Child. Joseph, a prominent Zambia scout Commissioner said reviving Kamenza would be the best thing.

Like I intimated earlier, I am enthusiastic and animated to see the hope the people of Chililabombwe have though questions linger on; will Konkola Copper Mines (KCM) accept to be part and parcel of this social responsibility activity?

Is KCM pleased with the eye-sore state in which Kamenza theatre club presently is?

Who are KCM environmental and social responsibility managers and what have they thought about this ‘dying’ infrastructure before?

If indeed Kamenza theatre has to come back, area Member of Parliament Esther Banda will have to join the bandwagon – she must join the young men and women and other local leaders and lobby for support from Lusaka, which I know she can easily do and achieve.

Pardon me for taking more space to remember Kamenza Theatre cub, and that I still owe avid readers a specific hint on the World Theatre Day.