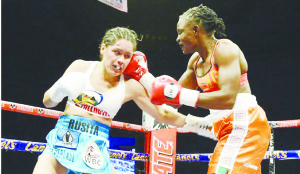 ZAMBIA’S Catherine Phiri etched her name in the world boxing records after becoming the first African female boxer to win the World Boxing Council (WBC) bantamweight gold title.
“I am very happy and can’t explain this excitement; I have achieved what many boxers in the world have failed to do. I promised them (fans) that I will come back a stronger boxer after that loss to McMahon (Christina) and I have done it,” an elated Catherine

Cathrine defeated holder Yazmin ‘Rusita’ Rivas of Mexico in six rounds thanks to an accidental head butt that left the Mexican bleeding forcing the referee to stop the fight.
Prior to the fight, Rivas had defended the belt four times which made Catherine’s task even tougher as the champion was fighting in front of her fans at the Convention Centre Rosarito in Baja California.
But the confident Catherine surprised Rivas with quick movements and powerful punches that caught the Mexican.
Catherine dominated the first three rounds as Rivas’ efforts to knock her out proved futile with Catherine ducking every punch that came her way.
The filled arena was silenced as the fans realised that Catherine was not a pushover.
Their fears came to reality towards the end of the sixth round when referee Raul Caiz stopped the fight after a nasty clash of heads between the boxers which left Rivas bleeding profusely.
Despite the referee docking a point from Catherine after the clash of heads the ringside doctor Ernesto Franco ordered that the fight should be stopped due to the injury on Rivas.
At the time the fight was stopped, the judges’ score cards showed that Phiri was in the lead with the first two scoring it at 58-56 and 59-55 while the third one was at 57-57.
Phiri said the win had made her achieve what many world boxers had failed to do.
She said she had kept her promise of returning a stronger boxer following her loss to Christina McMahon last year.
What makes her record-breaking win more impressive is that she did it away from home, most of her previous wins were in Lusaka leaving fans wondering if she could perform outside the country.
But her victory will end all the doubts.
She becomes the only Zambian boxer to win a WBC belt a feat that most Zambian boxing greats such as late Lottie Mwale and Joseph Chingangu failed to achieve but would be proud of Catherine.
Catherine thanked her manager Chris Malunga and trainer Mike ‘Weaver’ Zulu for believing in her.
Malunga hailed Catherine’s win saying she has won the title which was previously held by some of the greatest boxers including Susie Ramadan.
“Cathy is now the first African to lift the WBC bantamweight title and this will enable her be recognised as one of the best boxers in the world,’’ Malunga said.
The triumphant OQBP team is expected in the country tomorrow around midday.