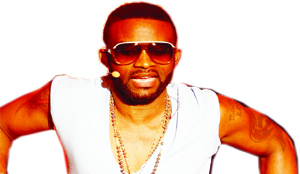 The management has decided to hold two shows, one on Valentine’s Day at Hollywood City nightclub and the the following night at Mulungushi International Conference centre.

Fally Ipupa has performed in Zambia on several occasions including at the famous Agricultural and Commercial show where he left the place spellbound with his singing and waist gyrating dances.

Ipupa Nsimba aka Fally Ipupa aka “DiCaprio” aka “La Merveille”born in Kinshasa, December 14, 1977, is a singer, songwriter and guitarist.

He was part of the group Quartier Latin for about 10 years and worked his craft with Koffi Olomide.

He notably created several hits for Koffi, among them Eternellement on Force de Frappe in 2001 and Ko Ko Ko Ko on Affaire d’Etat which got him being promoted to the position of conductor despite his young age. In 2006, debuting his solo career, he delivered his first solo album Droit Chemin that sold over 100,000 copies with hits like Droit chemin, Liputa or Kidiamfuka.

With his silky smooth voice, he has conquered the international music scene and reached the hearts of many with his music blend of various styles, such as soukous, ndombolo, pop and R&B.

In 2009, his album Arsenal de belles Mélodies was very much noticed, with hits like Chaise électrique, a duet performed with ex G-Unit R&B singer Olivia.

His presence in the international music industry has been acknowledged with awards such as Best Male Artist at the Cesaire Awards and Best Artiste or Group from Central Africa at the Kora Awards in 2007.

In 2009, he performed at the Africa MTV Awards, performing Bicarbonate. In 2010 he won The Best Video award for Sexy Dance at the MTV Music Video Awards.