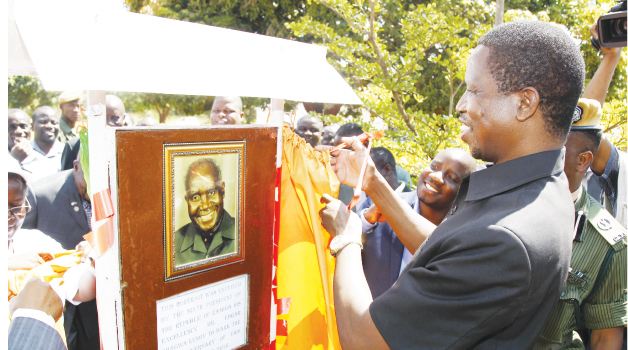 in Chinsali
PRESIDENT Edgar Lungu has reiterated his call for peace in the nation ‎and called on all Zambians to condemn violence perpetrated by selfish individuals.
The President, who was yesterday among scores of people who witnessed the Jubilee celebrations of Kenneth Kaunda Secondary School together with first Republican president Kenneth Kaunda, said Zambia could not turn ‎a blind eye to the famous motto of ‘One Zambia, One Nation’.
Mr Lungu praised the heroes and heroines, including Dr Kaunda, for sacrificing a lot and championing peace and unity which had to date made Zambia the beacon of peace in the world.
He told the gathering that the country’s tribe was Zambian, and that the onus lay with all citizens to exercise restraint and promote brotherly love which Jesus Christ spoke about in Mathew 22:37-39, which Dr Kaunda emphasised during his reign.
The President urged Zambians to adhere to the commandments of loving God and ‎their neighbours as this was the sure way of maintaining peace.
“With these commandments, if we put them in practice, then it would be very easy to respect others and co-exist with them,” Mr Lungu said
He said his administration had embarked on various development projects such as the construction of schools and universities to restore Zambia’s dignity.
The Head of State said he would ensure that Kenneth Kaunda Secondary School was repaired to improve its status.
The President donated a Higer bus to the school as well as another one to Chinsali Day Secondary School to honour the late President Michael Sata’s pledge to the learning institutions.
Mr Lungu also donated another bus which the provincial administration would decide where to allocate it.
The President urged former pupils of the school to contribute and improve its status.
Dr Kaunda, who was present at the event, praised Mr Lungu’s leadership and urged him to continue with his good work.
Kenneth Kaunda Secondary School, which has turned 50 this year, was opened in 1965 and was initially named Lubwa Secondary School before being renamed in honour of Dr Kaunda the same year.
The celebrations were held under the theme ‘Kenneth Kaunda Secondary School at fifty with improved learner performance and resuscitating the school infrastructure for national development’.
Scores of people witnessed the celebrations which were characterised by music and dance from local Zambian artistes, among them, Mozegator, Macky II and Jordan Katembula, commonly known as JK‎.
The President and Dr Kaunda together with other members of the entourage were taken on a tour of the school.
President Lungu’s assistant for Press and Public Relations Amos Chanda, Dr Kaunda, General Education Minister John Phiri, area Member of Parliament Christopher Mulenga, Local Government Minister, Steven Kampyongo, Muchinga Province Minister Mwimba Malama and traditional leaders were among the people who attended the function.
President Lungu, who first landed at Kasama Airport, arrived in Chinsali at 12:00 hours and found scores of residents waiting for him at Chinsali airstrip.
‎He proceeded to Kenneth Kaunda Secondary School for the Golden Jubilee celebrations, where he also unveiled a portrait of Dr Kaunda.
The General Education minister thanked Dr Kaunda for laying a firm foundation in the education sector.
He said God who saw Mr Lungu elected as President in January 2015 would allow him to be re-elected because the people of Zambia had fallen in love with his leadership.