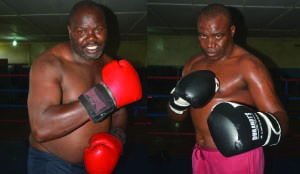 BY GRACE CHAILE –
HEAVYWEIGHTS Joseph “no pressure” Chingangu and Francis “Galagata” Zulu have finally put pen to paper for the two to square off in the much-anticipated International Boxing Federation (IBF) Inter-continental title fight slated for Dubai, United Arab Emirates on March 28.
The signing ceremony was held at Fairview Hotel in Lusaka.
Chingangu said the IBF fight was a good opportunity of placing Zambia on the world map as many people wanted to see the fight.
Zulu declared his readiness for the fight and was looking forward to sending Chingangu into retirement.
“Iam very fit and can proudly say I still have 10 or 15 years in the sport unlike my opponent who should have retired by now. I will give him a good fight and make sure that even those in Dubai know that there are professional boxers in Zambia,” he said.
The victor between Galagata and Chingangu will become the IBF champion for Africa and the Middle East.
And matchmaker and Exodus Boxing Stable manager Anthony Mwamba appealed to the Sports ministry and the corporate world to come on board and help sponsor the fight.
Mwamba said there was need for the boxers to get into camp to ensure that they were ready for the bout because they could not afford to take any chances.
“This is a rare chance that both Zambians will be fighting outside the country and what they will exhibit will speak volumes about the levels of boxing in Zambia. Sponsors should come on board to make the fight a success,” he said.
Mwamba said the total budget for the fight had not yet been compiled as they were still sourcing funds.
And Boxing Board of Control secretary, Simon Mwale appealed to the corporate world to help by supporting the sport.
Mwale said BBC had written to the Sports ministry so that defence teams could allow their boxers in the amateur ranks to turn professional but remain army personnel.
“We wrote to the ministry to allow the defence teams let their boxers in amateur ranks to remain employed even when they turn professional. It is a fact that boxing is the second sport to soccer (in Zambia).
“If those in the amateur ranks fear to become professional because they will lose their jobs, then the sport will not go forward. Boxing is just like soccer, let them be allowed to keep the job,” he said.