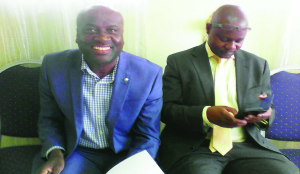 • New Power Dynamos coach Dan Kabwe (left) flanked by the club chairperson Bobline Cheembela before he was unveiled to the players. Picture by KALUMIANA KALUMIANA

DANNY Kabwe says he has returned to Power Dynamos where he has some unfinished business as he begins a three-year stint with the six-time champions.
Kabwe returns to Arthur Davies Stadium for a second spell after an initial stint with the Kitwe giants in 2001.
The ex-Zanaco coach was officially unveiled yesterday at Arthur Davies just before kickoff of Power’s home game against Kabwe Warriors.
‘That (my return) is the more reason the Power faithful have got confidence in me and that is the reason I have come back I have come back to prove myself. Even when I left, I left on a good note and even as I come back, I will make a difference,” Kabwe said.
Kabwe’s first stay at Power lasted less than a year when he joined them from Swaziland club Mhlume United where he won the 2000 Swazi Cup.
He was later poached by his former club Zanaco mid-way through the 2001 season after Power drew 1-1 with the Bankers in Kitwe much to the disdain of the Power faithful.
“That is the nature of the game. I have come back now so we can’t talk about the past, let’s talk about the present and how we are going to go forward from this moment in time,” Kabwe said.
His arrival sees Anderson Phiri revert to assistant coach after being in interim charge since May 5 following the dismissal of Tennant Chilumba.
Kabwe, who played for ‘Mighty’ Mufulira Wanderers and Zanaco, led Zanaco to their debut league title in 2002 and retained the crown in 2003. He was also briefly Chipolopolo assistant coach under Jan Bruwer in 2001.
Meanwhile, Power chairperson Bobline Cheembela said the club was excited to have Kabwe as their coach and were looking forward to seeing the team reach higher heights.
“He is not new to Zambian football,  he is a two-time Zambia league champion, he has won three cups including two Charity Shields and is very soon about to complete his UEFA B coaching course,” Cheembela said.
Kabwe takes over at Power who were fifth on 21 points, seven behind leaders Nkana, heading into yesterday’s home game against Warriors.