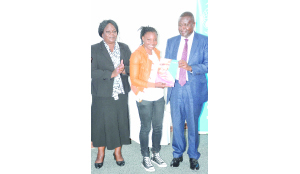 By HARBGUY MWAMBAZI –
ZAMBIAN World Boxing Council (WBC) female bantamweight champion Catherine Phiri has been named the first Zambian female United Nations International Children’s Emergency Fund (Unicef) brand ambassador.
This was announced at the launch of the 2016 world’s children report at Mulungushi International Conference Centre (MICC) in Lusaka yesterday.
Speaking at the launch, UNICEF chief of communications Patrick Slavin said that Zambia was proud to introduce the young female athlete as the Unicef brand ambassador in Zambia, mainly because of her focus in life.
“We are proud to announce her as ambassador of Unicef and she is the first female Zambian ambassador which makes it vital for all of us to be proud of this achievement. What made us come to this final decision was her going back to school and focusing on education apart from her boxing career.
“For this, we thought it was a powerful message to other young ones in our nation as we appointed her as our ambassador,” he said.
Slavin said that Catherine’s hard work towards her career path proves that she was a powerful woman, and would add to her success as Unicef ambassador.
After receiving her award, Catherine said her appointment as ambassador came at a good time as she would be able to magnify her message to the young women.
“I can surely say that my appointment as Unicef ambassador comes at a good time mainly because I can also be able to tell my message.
“My message being that boxing has kept me from many bad activities such as drugs, early pregnancies, and abuse of alcohol. Young women can also copy my path and do the same,” she said.
Catherine said that her courage and zeal to encourage other young teenagers especially women to pursue education added an advantage to her fulfilling her role as a Unicef ambassador.
“Others who see me going about my boxing activities might think I don’t have a passion to encourage my fellow youth, especially women.
“I believe that the enthusiasm I have to uplift them in the area of education also motivates me to carry out some of the responsibilities as an ambassador,” she said.