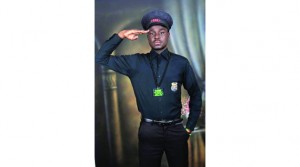 By HARBGUY MWAMBAZI –
GOSPEL rapper Ngalaba Newtons Chileshe says he is in the process of releasing a second gospel album.
Chileshe, who goes by the stage name – Prodigy – says the support he has continued to receive from his fans has made it possible for him to release his first album.
Chileshe last February recorded his first single entitled Angel, which he did as a dedication to his mother.
“I recorded my first song on February 12, 2015, which was titled Angel, and this was a dedication to my mum whose birthday falls on February 15.
“I felt she was the most important person in my life and that’s why I dedicated the gospel song to her,” he said.
Chileshe started music during his primary school days but he only went into music seriously in 2014.
The musician’s nine-track debut album is titled Visible Love which, he says, has been received positively by his fans as well as the public.
The album was released on February 14, 2015 and was officially launched on April 1 the same year.
“The album is about how good God has been to me. It has nine tracks but the four four main songs are Visible Love, No Choice, Glory Be To God and Far Away which is a tribute to my late friend Muka,” said Chileshe who revealed that he gets his inspiration from the love God has for humanity.
Besides music, Chileshe is currently doing a course in accounts.