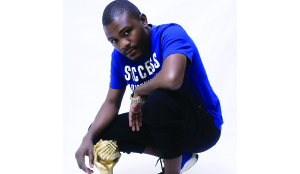 By JAJAH COULIBALY –
Radio disc jockey (DJ), Jackson Demus Phiri has condemned presenters in the habit of issuing politically biased statements on air.
Phiri, who is popularly known as DJ Show Star, feels radio presenters should use their influence to help people make informed decisions in upcoming elections.
“Anything we say or do on radio can directly or indirectly influence the people that listen to us,” he said.
The award-winning, multi talented DJ who is also a television personality has urged all DJs to be cautious about what they say.
He said the only message presenters should send to the public during the current campaign period is that of peace and unity.
“You find a DJ busy endorsing a candidate. That is not right. If it’s a paid for advert, it’s ok,” he said.
He challenged artistes in the habit of making only endorsement songs for politicians to also compose voter awareness and peace songs during elections.
He said people should strive to leave a legacy of peace that can to help upcoming generations of youths.
Show Star further said it would be better to have all radio presenters, such as DJs, to belong to an association that can regulate them.