By JAMES KUNDA in Lunga
PRESIDENT Edgar Lungu has cautioned civil servants against shunning rural areas as such attitude slows down the pace at which Government intends to develop the country.
He has also warned members of his Cabinet failing to juggle their ministerial jobs and duty to their constituents that he would not hesitate to fire them.
“If you are not capable of being both a minister and an MP, choose one job. I am warning those ministers that are MP’S but not visiting their constituencies soon I will soon let you go,” he said, addressing a public rally at Samfya primary school.
The Head of State said he wanted to see patriotism in all civil service staff as Government was addressing the challenges they faced when posted to work in far-flung areas.
Addressing civil service staff and PF officials in Lunga District of Luapula Province yesterday, Mr Lungu called for coordination between the civil service and the Patriotic Front (PF) so that service delivery to the people was enhanced.
The President said he did not expect antagonism between civil service staff and PF members, warning that any ruling party official or civil service employee frustrating the operations of the institution would be dealt with.
“Anyone against the development vision for this country is an enemy of the people and that one, I will remove. We want to transform this country and I want to see harmony between the civil service and the party,” Mr Lungu said.
President Lungu has threatened to dismiss Cabinet ministers not visiting their constituencies.
The Head of State said yesterday he was in possession of information that some ministers were not visiting their constituencies because they were too remote.
He reminded the MPs that he had also served in parliament and held cabinet portfolios at the same time but still regularly visited the electorate in Lusaka’s Chawama constituency.
He said the role for MPs was not only to make laws in parliament but also to contribute to development in their respective constituencies. 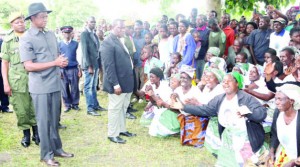 “I have been deputy and cabinet minister before and I used to work in my constituency,  that is why I am here today. It does not matter whether you are a cabinet minister you should visit your constituencies,” he said.
Meanwhile, Mr Lungu also had an engagement with traditional leaders in Samfya, whom he assured of Government’s unwavering commitment to roll out development countrywide.
The traditional leaders are chiefs’ Kalasa Mukoso, Chitembo, Kasoma Bangwe, Mwewa, Mbulu, Mulongwe and Mwansa Kombe.
The President tasked Members of Parliament (MPs) and ministers from the province to ensure that service delivery to the people was enhanced as the PF promised this to the people during last year’s electoral campaigns.