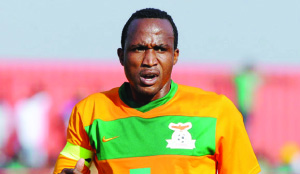 RED Arrows defender and captain Bronson Chama is the 2013 Player of the Year.
Chama beat the other two contenders for the award, Nkana striker Ronald ‘Sate Sate’ Kampamba and Zesco United midfielder Khondwani Mtonga for the top prize.
This was announced during the 2013 MTN-FAZ Premier League awards held at Moba Hotel in Kitwe last night.
Kampamba, however, was awarded with the topscorer award after bagging 18 goals last season that helped Nkana win the league title for a record 12th time.
Arrows exciting midfielder Bruce Musakanya, now on loan at Nkana, was voted the Young-Player-of-the-Year beating his team-mate Shadreck Malambo and Julius Situmbeko of Power Dynamos.
Nkana veteran defender Billy Mwanza won the Most Disciplined Player award ahead of Situmbeko and Malambo as Masauso Mwale was voted Coach-of-the-Year.
Mwale beat Zesco mentor Tenant Chembo and Nchanga Rangers coach Fighton Sikumonda for the award.
Gladys Lengwe retained her Referee-of-the-Year award, fending off competition from Wisdom Chewe of Kabwe. The Best assistant referee award went to Moses Mwale, who beat Stanley Hachiwa, Romeo Kasengele and Kabwe Chansa of Kalulushi.