By CHILA NAMAIKO –
PRESIDENT Edgar Lungu has severely criticised traditional leaders selling huge tracts of land to foreigners for personal gain, sometimes in exchange for a motor vehicle, and directed that the Land Act be revised to stop the trend.
The President told Parliament in a state-of-the-nation address yesterday that he was disturbed to learn that in some cases, thousands of hectares of land where exchanged for such low price that it reduced the transaction to a cheap hand-out.
Such is the indiscriminate nature of the transactions that in some cases, existing settlements and landmarks such as burial sites, grazing areas and blocked off access to water for local communities were totally disregarded.
“As a matter of urgency, need to come up with a revised Land Act and Policy that guarantees sovereignty over our land which is a key natural heritage. I am, therefore, directing the minister of Lands and Natural Resources to bring to Cabinet a revised Lands Act, which will ensure that our land is protected for our future generations,” he said. 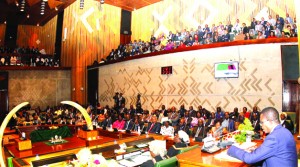 Mr Lungu warned that at the rate land was being sold there was absolute danger of future generations being rendered landless and squatters in their own country. “This cannot be allowed,” he said.
President Lungu said his address to the House was to fulfil the provisions of the new Republican Constitutional that obliged him to address the House twice a year, apart from his traditional speech when opening a session of Parliament.
He said such disregard for the value of land which was sometimes given in exchange for second-hand motor vehicles shamed the selfless spirit of the country’s forefathers and mothers that fought and died to have a sovereign state.
Mr Lungu also addressed the perennial scam of party cadres usurping the powers vested in relevant authorities by illegally appropriating land and sharing it among themselves as though they were a law unto themselves.
“Let me sound a stern warning that my Government will not sit idle while unbecoming, unpatriotic behaviour continues,” Mr Lungu said, warning that individual interests outweighed those of the nation, Government would not hesitate to repossess or re-enter any such pieces of land or sites.
He directed the minister of National Planning to ensure that the Seventh National Development Plan and other future plans were defined in comprehensive, clear objectives and strategies connected to national land use.