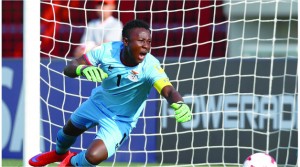 From ELIAS CHIPEPO At Cheonan Sports Complex –
COACH Beston Chambeshi has expressed worry with the manner Zambia is conceding penalties after watching his side concede two penalties against Costa Rica at the ongoing FIFA Under-20 World Cup here in South Korea.
Meanwhile, Chambeshi urged his players not to cry over ‘spilled milk’ following the disallowed goal and focus on preparing for the last round of 16 fixture against an opponent to be known after today’s final group matches.
Zambia finished top on six points despite yesterday’s defeat to Costa Rica, who sneaked into the second round as one of the best third placed finishers. Portugal rallied from a goal down to beat Iran 2-1 and finish second in the group.
Costa Rica had the Video Assistance Referee to thank for their passage after Paston Daka’s 89th minute goal was ruled for offside.
Paston had raced with the ball but saw his attempt bounce off keeper Erick Pineda and Emmanuel Banda collected the ball but his strike hit the crossbar and Paston was on hand to finish off the rebound.
Earlier, Costa Rica were awarded two penalties in each half which they both missed but managed to score a rebound to claim a 1-0.
The first penalty was awarded in the 15th minute when Moses Nyondo was adjudged to have fouled Jimmy Marin inside the box prompting New Zealand referee Matt Conger to point to the spot.
Keeper Mangani Banda saved the initial kick from Jostin Daly but paired the ball back into the path of the striker who made no mistake as he reacted fastest to the rebound to slot inside the net as the defenders were caught ball watching.
The second came in 65th minute when Ngosa Sunzu forcefully pushed Randall Leal, who stood up to take the responsibility but he hit the post and Mangani was on hand to deny Bernald Alfaro rebound before the ball went out for a corner.
Speaking during a post-match conference yesterday, Chambeshi said he was uncomfortable with the way the team was giving away penalties and would want to watch videos as he cleverly declined to pile blame on referees.
“I am not comfortable with the way the team is conceding penalties but again these players are using their cleverness to win these penalties, like the second one-it was not a penalty. The referees need to be alert because these players are too clever,” he said.
Chambeshi said the team accepted defeat and had shifted focus to the next opponents.
Zambia is among other teams expected to either face Group A third placed side Argentina, Germany from Group B or a side from Group F where it is still open and has the United States of America (four points), Senegal (three points), Saudi Arabia (three points) and Ecuador on one.
“Yes we accept defeat. We have lost but the boys played very well, they tried their level best because we wanted to win so that we maintain our top slot without dropping a point. We look forward to our next opponents,” he said.
Chambeshi said Zambia was ready to face any team and would be hoping the team maintain the fighting spirit which saw them score the goal though it was ruled out for offside.
Chambeshi piled praise on Sunzu and Muchindu Muchindu for their play despite the defeat.
Sunzu almost gave Zambia the lead in the eighth minute but his long range effort hit the post following a good save by keeper Erick Pindea in the eighth minute.
Zambia Line Up: Mangani Banda, Moses Nyondo, Prosper Chiluya, Muchindu Muchindu, Fashion Sakala, Enock Mwepu (Harrison Chisala 79), Shemmy Mayembe, Edward Chilufya (Musonda Siame 79), Ngosa Sunzu, Paston Daka, Boyd Musonda (Emmanuel Banda 51).
Unused subs: Benson Chali, Conlyde Luchanga, Edward Tembo, Samson Banda, Kenneth Kalunga, Jim Phiri.